Proteins can transfer electrons at a distance

By Eva MartiJanuary 3, 2019IBEC
No Comments

Collaborating groups at IBEC, a BIST centre, have published a study in Nature Communications that reveals that electron transfer can take place while a protein is approaching its partner site, and not only when the proteins are engaged, as was previously thought.

The results open up a new way of thinking about how proteins interact, and can have implications in a better understanding of many processes – such as photosynthesis, respiration and detoxification – in which electron transfer plays an important role.

The relocation of an electron from one chemical entity to another – electron transfer (ET) – doesn’t happen passively: electrons are carried individually by redox proteins.

The demands on the ET capabilities of these proteins are conflicting: their binding must be tight to keep ET rates high, but sufficiently weak to allow a high turnover rate and overall ET efficiency. As redox partners approach each other, an ‘initial encounter’ complex is formed that leads to a final ‘active’ complex – which is when ET was previously thought to happen. 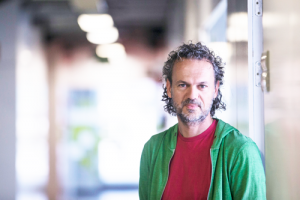 The structure of some active complexes between redox partner proteins has been revealed by X-ray crystallography, and substantial differences observed in the distance between the active sites of several has raised the question of whether ET between proteins can already occur while the protein is approaching its partner site. Together with collaborators from the UB and the University of Seville, the researchers in IBEC’s Nanobioengineering group worked with its Nanoprobes and Nanoswitches group (led by Pau Gorostiza, left) to use a technique called electrochemical tunneling spectroscopy to show that the current between two redox partner proteins occurs at strikingly long distances.

“Computational simulations suggest proteins can manipulate the solution they’re surrounded by in order to perform their ET functions,” explains Anna Lagunas, a senior researcher in IBEC’s Nanobioengineering group and first author of the paper. “We saw a reduced ionic density between the proteins that gives rise to a conduit that extends their electric field through the aqueous solution.”

The observation challenges the common assumption that the formation of a tight complex between the protein partners is required for charge to be transferred, and may provide an explanation to how redox protein partners conciliate high specificity with weak binding in order to maintain the high turnover rate required for ET.

More information can be found at the IBEC website here.