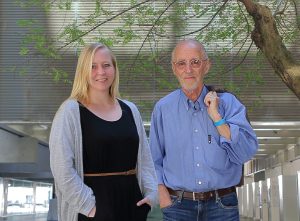 Miguel Beato was awarded the SCB Prize in recognition of his career. A prize which recognises outstanding scientists in the field of life sciences that have made exceptional contributions to the advancement of life science research in Catalonia or other catalan-speaking territories. Beato was awarded this prize for his life long scientific contributions to our understanding of hormone regulation in gene expression and its role in breast cancer. The Catalan Society of Biology also highlighted his role as founder and director of the CRG, one of the BIST research institutes.

Additionally, Roni Wright, postdoctoral researcher in Beato’s lab, was awarded the SCB Prize in the category of best scientific article. The jury awarded her recent work titled «ADP-ribose-derived nuclear ATP synthesis by NUDIX5 is required for chromatin remodeling», which was published in Science. “It represents the first evidence that ATP can be produced within the cell nucleus, which allows the cells to quickly respond to energy needs when having chromatin modifications,” as the SCB stated during the announcement.

Other CRG researchers and collaborators were finalists for the SCB Prizes. Toni Gabaldón, ICREA research professor and group leader of the Comparative Genomics laboratory for the best article prize for his recent Nature paper about the origin of Eukaryotic cells. Also, Marc Brusosa, a secondary student who performed his research project as an intern at the Design of Biological Systems laboratory, was finalist at the Research Project for Secondary Students. His project was focused in the use of Mycoplasma as a vaccine, in the framework of the MycoSynVac European project.

The award ceremony took place at the Casa de la Convalescència within the Sant Pau Art Nouveau Site, during the 2nd edition of the “Biology Night”. This special night gathers together scientists and the general public to celebrate the scientific advances of the year in Catalonia.