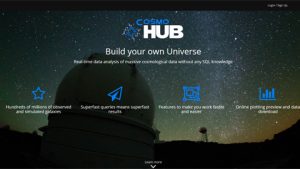 IFAE, the Institute for High Energy Physics, is involved in developing a catalog of 2 billion simulated galaxies that closely mimic the properties of observed galaxies and are based on simulations of dark matter distributions. The work will prepare the observations of the ESA’s Euclid Mission.

The simulated catalog of the Euclid Flagship contains more than 2 billion galaxies, the largest number to date. It has been developed by researchers from the Institute of Space Sciences (ICE, IEEC-CSIC) and the Scientific Information Port (PIC), a joint project of the Institute for High Energy Physics (IFAE) and the Centro de Investigaciones Energéticas, Medioambientales y Tecnológicas (CIEMAT), with researchers from the University of Zurich as part of the ESA’s Euclid Mission.

The goal of the Euclid Mission is to map the geometry of the dark universe by taking images and spectra of billions of galaxies. The mission, to be launched in 2020, will provide a wealth of unprecedented high-quality data that will open a unique window to the early stages of the universe’s evolution.

The catalog simulates the area of ​​the cosmos that Euclid will observe when it begins its operations. Having a cosmological simulation that matches the expected volume and complexity of the actual data is essential to prepare the analysis of the observations provided by Euclid. Simulated galaxies closely mimic the complex properties of real sources: from their shapes, colours, luminosities, and emission lines in their spectra to the gravitational distortions that affect the light emitted by distant galaxies as it travels towards us.

“The simulation of galaxies is based on a previous simulation developed in the Piz-Daint supercomputer in Switzerland, which reproduces the gravitational evolution of dark matter particles. What we have done is populate galaxies with concrete properties, the distribution of simulated dark matter, “says Pablo Fosalba, an ICE researcher and co-leader of Euclid’s Cosmological Simulations Working Group.

CosmoHub, the Big Data platform developed and managed by the Scientific Information Port (PIC), one of the Euclid Data Centers, will distribute the simulated data to the more than 1000 members of the Euclid Consortium. CosmoHub uses state-of-the-art tools for handling massive data using methods similar to those of the Google search engine, and is able to perform calculations on tables containing billions of entries in a matter of seconds.

More information about the Euclid Mission and the participating Spanish centres can be found in the IFAE press release.