Giving Tuesday: an opportunity to fund a research career

IRB Barcelona has launched a fundraising campaign called “Future” (#IRBfutur). The campaign, which will run for two months, seeks to raise public awareness of the role that biomedical research plays in advancing medicine, and the need to train scientists to ensure they can make the discoveries that may one day save our lives. The campaign is part of “Giving Tuesday”, a day devoted to charitable donations, which this year falls on today, Tuesday 29 November. 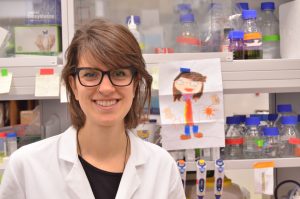 The initiative aims to raise 25,000 euros to fund the first year of a PhD student at IRB Barcelona (© Photo: L.T. Barone, IRB Barcelona)

To emphasize the importance of training, the campaign aims to raise 25,000 euros from individuals, associations and companies. This amount will fund the first of four years that a doctoral student spends at IRB Barcelona working on a cutting-edge biomedical research project in order to obtain his or her PhD degree.

Joan J. Guinovart, director of IRB Barcelona, says that “the medicine of the future starts in centres like IRB Barcelona. The discoveries being made here today by young researchers will serve to improve the quality of our lives. By donating, we are showing what kind of society we live in and what really matters”.

The International PhD Programme at IRB Barcelona is one of the flagship activities of the centre. Since it was founded in 2015, IRB Barcelona has hosted 350 PhD students from around the world, 100 of whom are currently working towards their theses.