Andreu Mas-Colell, president of the Barcelona Institute of Science and Technology (BIST), gave the inaugural lesson and highlighted the role of universities in research last week at the opening ceremony of the Universitat Internacional de Catalunya (UIC Barcelona) 2019-2020 academic year. 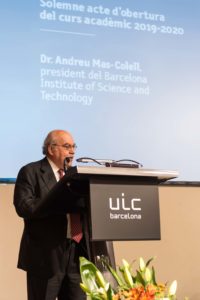 The opening ceremony was held at the university on October 16th, with rector Xavier Gil chairing the event. The president of the Barcelona Institute of Science and Technology, Andreu Mas-Colell, gave the inaugural lesson entitled “The research university of the 21st century”.

Professor Mas-Colell reviewed the role research has played in universities since the Middle Ages. He began by explaining that Europe has a dilemma, namely to figure out “how to combine the welcome increase of university students with the imperative that all universities should promote research.” He explained that there is “the equipment, which should be shared” while at the same time the fact that “scientists should have more time to do research”. These are not easy concepts to merge.

Another characteristic of research, according to Andreu Mas-Colell, is that “it tends to promote clustering of researchers, but this clustering does not need to occur in the same institution”. He added that “in the 21st century a research university will no longer be defined by the quality of its library or its scientific equipment, but by the quality of its research professors.

Professor Mas-Collell underlined that “it is worth devoting resources to attract and maintain talent because, among other reasons, this talent attracts resources.” He concluded by saying that “in Catalonia we have experience with this circle.”

More information about the event can be found on the UIC Barcelona website.