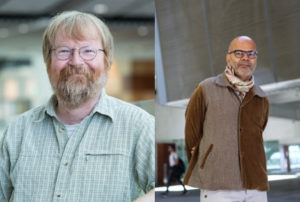 Thomas Surrey and Vivek Malhotra, both ICREA Research Professors at the Centre for Genomic Regulation (CRG), a BIST centre, have received ERC Synergy Grants for their projects BIOMECANET and LiquOrg, respectively.

Two researchers at the Centre for Genomic Regulation (CRG), a BIST centre, are part of two international consortia that will receive 20 million euros to pursue two radical ideas in cell biology. The CRG’s Vivek Malhotra and Thomas Surrey have been awarded one ERC Synergy Grant each, which comes with funding designed to tackle some of the world’s most formidable research problems.

Vivek Malhotra, Coordinator of the Cell & Developmental Biology Programme at the CRG, a BIST centre, will form part of a research group coordinated by the Centre National de la Recherche Scientifique (CNRS) with participation from University College London and the Universidad Complutense de Madrid.

One third of all proteins encoded in the human genome are sorted and transported through a series of attached membrane-enclosed compartments called the Endoplasmic reticiulum and Golgi system. Despite components fluidly interchanging within the system, it remains stable and elastic, like a stretched spring always returning to its original state. How these compartments are built and organised spatially to order the direction of protein secretion remains an unanswered question.

For 50 years researchers have believed that membrane compartments reproduce from pre-existing compartments through expanding and dividing like the cell itself. The recent discovery that some proteins self-organise into liquid-like droplets casts these facts in a new light. Researchers will test their hypothesis that the ER/Golgi system is fundamentally a liquid with a phase‐separated internal organisation. The researchers plan to synthesise the ER/Golgi system from pure proteins that have the properties to form liquid condensates in vitro and in intact cells.

“What was previously an unorthodox line of thinking is now tenable. If we confirm our hypothesis, it will literally rewrite the history of cell biology,” says Vivek Malhotra. “Catalonia is rapidly being recognised as the global centre for cell and tissue biology, and this funding is a testament to that.”

Thomas Surrey, Group Leader at the CRG (a BIST centre), will form part of another research group coordinated by the Max Planck Institute of Molecular Physiology in Dortmund, and with participation from the Sainsbury Laboratory at the University of Cambridge.

The group will study one of the most fundamental processes in life – cell division. When a cell divides, it must go through a radical and dramatic transformation before it splits. Chromosomes are duplicated, rearranged, and aligned in a very particular manner before they are pulled into the two daughter cells. Despite this mechanism being at the heart of biology, it is still poorly understood. The group have set the extraordinarily ambitious goal of unravelling this interplay by re-engineering it in vitro and by modelling it in silico.

“By rebuilding the machine that segregates the genetic material during cell division in the test tube and in the computer, we will reveal how biochemistry and mechanics work together to drive a key process of life.”, says Thomas Surrey, “Just like an engineer understands how an engine works, we aim to understand how the cell divides by putting back together the engine of division from its individual parts.”

The funding announcement for these two cell and tissue projects coincides with the inaugural seminar for Cell & Tissue Research In Catalonia (CATCAT), a new initiative kick started by Malhotra. The initiative brings together research groups from different institutes in Barcelona, focusing on understanding cellular and molecular mechanisms driving fundamental biological processes.

More about the ERC Grants

In this ERC Synergy Grant Call, thirty-four research groups have been selected to receive 350 million euros in total to address some of the world’s most formidable research problems spanning multiple scientific disciplines. More than 440 proposals were submitted, making it one of the most competitive in ERC history. The funding helps groups of two to four outstanding researchers bring together complementary skills, knowledge and resources in one ambitious project. The ERC Synergy Grant scheme is part of the EU’s research and innovation programme, Horizon 2020.

The grants, each worth around 10 million euro, will help create some 1,000 jobs for Postdoctoral Fellows, PhD Students, and other staff in the grantees’ research teams.