The European Molecular Biology Organization (EMBO) has announced the names of the researchers who will join the prestigious organisation as “Young Investigators”. Among them are two BIST researchers: 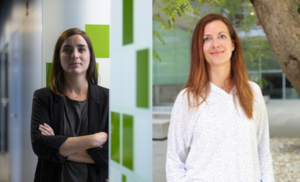 This year, thirty international life scientists have been selected as EMBO Young Investigators, four of them working in Spain. The call received 216 eligible applications and the success rate was 14%. The selected scientists will join the existing network of 73 current and 384 former members of the programme. The new EMBO Young Investigators will receive financial and practical support for a period of four years, starting in January 2021, and they will have the chance to participate in a variety of networking opportunities.

“We are delighted to welcome the new Young Investigators to the EMBO community and look forward to support them in leading and further developing their independent laboratories,” says EMBO Director Maria Leptin. “These 30 life scientists have demonstrated scientific excellence and are among the next generation of leading life scientists. Their participation in the EMBO Young Investigator Programme will help them in this critical phase of their careers.”

The EMBO Young Investigator Programme supports life scientists who have been group leaders for less than four years and have an excellent track record of scientific achievements. They must carry out their research in an EMBC Member State, an EMBC Associate Member State (currently India and Singapore) or in countries or territories covered by a co-operation agreement (currently Taiwan and Chile).

EMBO Young Investigators receive an award of 15,000 euros in the second year of their tenure and can apply for additional grants of up to 10,000 euros per year. They also benefit from a variety of networking opportunities for them and their lab members, mentoring by EMBO members, training in research leadership and management, as well as responsible conduct of research, and access to core facilities at the European Molecular Biology Laboratory (EMBL) in Heidelberg, Germany.