Thirteen researchers working at centres of the Barcelona Institute of Science and Technology (BIST) were among the winners of this year’s TV3 La Marató Prizes. 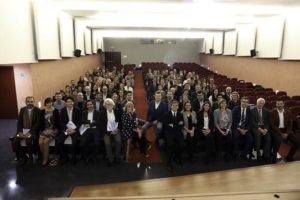 Members of all 43 winning projects at the awards ceremony on October 30, 2019

The TV3 La Marató is charity telemarathon held every year on the Sunday before Christmas. The event is broadcast on TV3, the regional Catalan television channel, and is jointly organized by Televisió de Catalunya and the TV3’s La Marató Foundation.

The donations raised in December 2018 were awarded on October 30, 2019 to 43 scientific projects focused on cancer research.

Among this edition’s winning projects are 13 researchers (in 10 projects) working at BIST centres. Their projects are multidisciplinary, innovative, and truly cutting-edge. Projects have received an average of about 325,000 EUR each to conduct their work in the field of cancer research over the next three years.

The winning BIST researchers are:

Congratulations to the winners!

More information can be found in this press release.