• With this step, the new complex for research and innovation in biomedicine, biodiversity and planetary wellbeing, promoted by the Barcelona City Council, UPF, CSIC, and BIST, is launched.

• The BIST building will be the first to be constructed, and will house more than 500 researchers and 50 research groups over 25,000 square metres.

• The architectural design of the BIST building, which five international teams are competing to create, will be chosen in June.

With the final approval this week of the urban development plan for the Antic Mercat del Peix area, the project for the construction of the research and innovation complex focused on biomedicine, biodiversity and planetary wellbeing is officially underway. It is promoted by the Barcelona City Council and Pompeu Fabra University (UPF), with the participation of the Spanish National Research Council (CSIC) and the Barcelona Institute of Science and Technology (BIST).

For the Mayor of Barcelona, Ada Colau, this is “a project that reaffirms Barcelona’s commitment to being a city of science, a project that its citizens can be proud of, and that represents the starting point for the massive transformation of the entire Parc de la Ciutadella area.”

The mayor participated in a presentation to the media this morning about the status of the project. Jaume Casals (UPF Rector), Luis Calvo (CSIC Delegate in Catalonia), and Andreu Mas-Colell (President of the BIST Board of Trustees), were also in attendance. In addition, Janet Sanz (Deputy Mayor responsible for Ecology, Urban Planning, Infrastructures and Mobility) explained the details of the new urban development plan for the Antic Mercat del Peix area, which was complemented by the presentation of the scientific projects that will be housed in the three new buildings. These will be constructed on the 7,500 square metre area that is currently a car park and that was, up until the mid-20th century, Barcelona’s central fish market (Mercat del Peix).

Specifically, Josep Lluís Martí (UPF Vice-Rector for Innovation Projects) and Ester Oliveras (UPF Sustainability Delegate) presented the new interdisciplinary research centre focused on planetary wellbeing, which will be built by UPF. Salvador Carranza (Director of the Institute of Evolutionary Biology – IBE), presented the IBE building and its research lines, which will include 120 people and 25 research groups. Finally, Gabby Silberman (General Director of BIST) presented the precision medicine project that BIST will develop in its new BIST building in the Mercat del Peix. 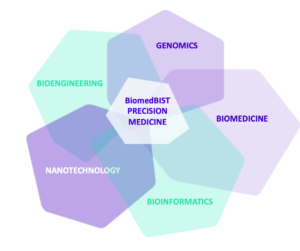 BIST will have the largest building in the complex (25,600 square metres spread over several floors, out of a total of 46,000 square metres built). The new building will permanently host research groups from four BIST centres: IRB Barcelona, IBEC, ICN2, and CRG. It will also have researchers from ICIQ, IFAE, and ICFO on an ad hoc basis, depending on the projects being developed.

More than 800 people are expected to work in the new BIST building, of which 500 will be researchers in more than 50 research groups. These researchers will focus on studying high-impact pathologies such as cancer and metastasis, in addition to phenomena such as ageing and responses to pathogenic agents. The research will be done with an integrated vision of the patient, linking the individual with her or his environment, by applying the most advanced knowledge in biomedicine, genomics, bioinformatics, bioengineering, nanotechnology, and other innovative experimental techniques.

BIST researchers will also work on the design and validation of new personalised therapeutic approaches based on cell and tissue biomechanics, cell reprogramming, nanomedicine, immune response modulation, and tissue regeneration.

Five international teams of architects are currently working on their design proposals for the new BIST building at the Mercat del Peix. The winning team will be chosen at the end of June.

The total cost of the construction of the buildings planned for the Antic Mercat del Peix area is approximately 92.8 M€, as per the following cost distribution:

The work, which will be carried out in different phases, will begin in April 2022 and is expected to be completed in the first half of 2025.