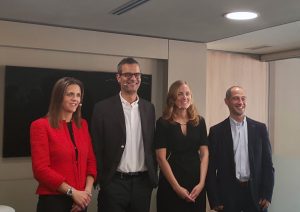 Ona Therapeutics, a spin-off from the BIST centre IRB Barcelona and ICREA has been founded by researchers Salvador Aznar-Benitah and Valerie Vanhooren after receiving an investment from Sabadell Asabys.

Ona Therapeutics announced last month the close of a seed funding round of € 1.5M given by Sabadell Asabys, a fund managed by Asabys Partners and devoted to investments in health innovation. With this injection of capital, the start-up will begin work on the development of a new drug for the treatment of metastatic cancer.

The company has been created by four partners: IRB Barcelona, ​​ICREA, and researchers Salvador Aznar-Benitah and Valerie Vanhooren. The financing provided by Sabadell Asabys will be added to other resources, which are currently being negotiated with local and international funds. Funding for Round A is hoped to close with approximately € 20M, an activity that also involves Sabadell Asabys.

The new drug will be developed from the initial results, which were published in Nature by Aznar Benitah in January 2017. Those findings show that blocking the pathways that allow fat metabolism in animal models of cancer inhibits the cells that give rise to metastases, thereby preventing the development of these malignant growths and potentially having the capacity to eliminate existing ones. These results, which were obtained in oral, melanoma and breast cancer models, were published by Aznar-Benitah in 2017 in the journal Nature, and they have subsequently been replicated in several types of tumours, including ovarian, gastric, bladder and prostate cancer, among others.

This research project was made possible thanks to funding from La Marató Foundation of TV3 in its 2012 call, the Worldwide Cancer Research in the United Kingdom, and the Banco Santander, through Santander Universidades and with the support of the Botín Foundation to promote technology transfer. The lab headed by Aznar-Benitah at IRB Barcelona is also supported by funds from the European Research Council (ERC), the Ministry of Science and Innovation, through the ERDF, and the Catalan Government.

“Metastasis is the main cause of death in patients with cancer and until now it has been very difficult to find ways to tackle metastatic cells. Our research has allowed us to identify and purify the cells that form metastases in various types of tumours and to observe that their activity is totally dependent on the intake of certain fats. Our research has allowed us to develop pre-clinical therapeutic strategies and we have observed that they have a very promising anti-metastatic effect. Ona Therapeutics aims to apply these clinical results to patients with metastatic cancer,” says Aznar-Benitah.

More information can be found on the IRB Barcelona website.