The Big Bell Test invites 30,000 people to participate in a quantum physics project

By Adela FarréNovember 9, 2016ICFO
No Comments

Would you like to know how your human unpredictability can help advance science? This is your chance! On November 30th 2016, you’ll have the opportunity to participate in a unique worldwide project that will use human randomness to power experiments that test the laws of quantum physics. 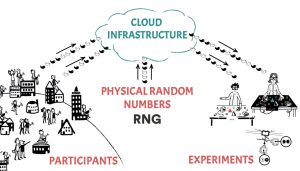 Coordinated by ICFO, the BIG Bell Test is a worldwide project that intends to carry out a set of simultaneous quantum physics experiments in different labs around the world on November 30th. The experiments need the participation of a large number of people, who will contribute to the initiative by behaving as randomly as possible.

This initiative was born from ICFO’s contributions to the loophole-free Bell tests of 2015, which required an extraordinary attention to the nature of randomness and its role in physics experiments. ICFO contributed to these experiments by using a physical random number generator that produced very fast, very pure random numbers. Those experiments inspired the idea of a large-scale human-driven experiment using internet technologies.

On November 30th, there will be nine experiments running, carried out by nine scientific partners. The experiments will test, among many other things, the properties of entangled particles.

In order to consider it a success, the project needs the contribution of at least 30.000 people, on November 30th. On that day participants around the world will be asked to contribute through a video game, tailored specifically for this project that can be found on the www.thebigbelltest.org website (The BIG Bell Quest).