• The jury of the international architecture competition organised by BIST has recommended Barozzi Veiga’s proposal from the five finalists. It was chosen for the uniqueness of the planned building, characterised by its volume and defining eaves, the interior layout, and its solutions in response to environmental requirements.

• The construction of the new BIST building, which will begin in 2022, will launch the Antic Mercat del Peix multidisciplinary research hub, supported by Universitat Pompeu Fabra (UPF) and the Barcelona City Council as part of the ambitious ‘Ciutadella del Coneixement’ initiative.

Barcelona, 15 July 2021. The Barcelona Institute of Science and Technology (BIST) has selected the Barcelona-based studio Barozzi Veiga to create the basic and executive plans for its new building, which will be located on the grounds of the Antic Mercat del Peix adjacent to Ciutadella Park. The BIST building, whose construction will begin in 2022, is the first project of the ambitious Ciutadella del Coneixement initiative. Developed by the Barcelona City Council, the Generalitat de Catalunya, and Universitat Pompeu Fabra (UPF), it aims to transform the area around Ciutadella Park into a hub for research and innovation. 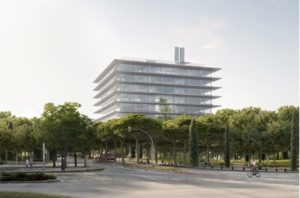 The jury of the BIST International Architecture Competition was presided over by Dr. Jordi Camí, Director of the Parc de Recerca Biomèdica de Barcelona, and included Oriol Clos Costa (architect), Beth Galí (architect appointed by the Col·legi d’Arquitectes de Catalunya), Xavier Matilla (Barcelona City Council’s chief architect), Sito Alarcón (biologist), Ramon Sagarra (industrial engineer), and Margarida Corominas (PhD in economics and manager of IRB Barcelona). They highly valued the soundness of the proposal and its compliance with all the specified requirements, both in terms of urban planning and in terms of its functionality, the environment, and economics.

Jordi Camí, Chairman of the jury, pointed out that “the five submitted proposals are of the highest quality, but we have found that Barozzi Veiga offers the best starting point for this project, given the building’s uniqueness and volume, defined by a series of horizontal eaves, its interior layout, which will facilitate the development and evolution of the programme over time, and the handling of the installations, both in relation to their layout and to the environment.”

The jury also highly valued the quality of the proposal put forward by the Moneo Brock / Baas / CasaSolo team, which was the runner-up in the competition, for its efforts to relate the project to its surroundings and for the organisation of the ground plan, with an off-centre interior courtyard that would allow for generating spaces of various dimensions. The other three finalists in the competition were Pich-Aguilera / 2BMFG Arquitectes / JC Ingenieros, BIG+IDOM, and Woods Bagot.

The winning studio was founded in Barcelona in 2004 by Fabrizzio Barozzi and Alberto Veiga, and has received the 2015 Mies Van der Rohe European Architecture Prize for the Szczecin Phillarmonic Hall (Poland), among numerous other awards. In 2019 they received the “Best Architects 20” award and the Chicago Atheneum International Award for the Bündner Museum of Fine Arts in Chur (Switzerland). Other notable buildings designed by the studio that have received wide international recognition include the Tanzhaus cultural centre in Zürich and the Cantonal Museum of Fine Arts in Lausanne. The BIST building will be the first Barcelona-based building the Barozzi Veiga team will create.

Gabby Silberman, Director General of BIST, emphasised the organisation’s satisfaction with the high calibre of all proposals and states that “the winning proposal has the elements to make the new building an architectural landmark for the city, just as we hope the work of our research groups will make it an international benchmark in precision medicine“.

The new building, which will house more than 500 researchers and some sixty research groups from four BIST centres (CRG, IBEC, ICN2, and IRB Barcelona), will have a surface area of nearly 25,000 m² distributed over several floors and dedicated to multidisciplinary research. The project has an overall budget of 50 million euros.

The new BIST building in the Antic Mercat del Peix complex is the first piece of the ambitious Ciudadella del Coneixement initiative, developed by the Barcelona City Council and the UPF to convert the area around Ciutadella Park in the centre of Barcelona into a southern Europe reference hub of urban knowledge in biomedicine, biodiversity and planetary wellbeing. In March, the Barcelona City Council’s Urban Planning Commission approved the reform of the Urban Development Plan that will allow the conversion of the land currently occupied by a car park, between Wellington Street, Sardinia Street, and Icària Avenue, into a research complex.

The Barcelona City Council’s Deputy Mayor for Ecology, Urban Planning, Infrastructures, and Mobility, Janet Sanz, stressed that “the projects for a new sustainable city model that creates quality employment continue to move forward“. “With this new centre, Barcelona will gain a science and innovation hub, taking another step towards a city with an economic model for the future. A city that puts urban planning at the service of research“, she assured.