• Mayor Ada Colau and Deputy Mayor Joan Subirats met today with the heads of the Barcelona Institute of Science and Technology (BIST) and the seven research centres that make up BIST.

• At the meeting, the collaborations that BIST and the City Council have in place in various areas were reviewed, and the Next Generation EU projects led by various BIST centres were presented.

Barcelona, April 27th, 2021. The Barcelona City Council and the Barcelona Institute of Science and Technology (BIST) have committed to continue deepening their collaboration in order to make scientific research one of the cornerstones of the development and international projection of the Catalan capital. This was stated at a meeting held today by the Mayor of Barcelona, Ada Colau, and the Deputy Mayor Joan Subirats, responsible for Culture, Education, Science, and Community, with the President of BIST, Andreu Mas-Colell, and the BIST Director General, Gabby Silberman.

Directors and managers of the seven BIST centres attended the meeting, which took place at the Escola Industrial where the BIST Foundation is based. Among them were Luis Serrano, Director of CRG, Josep Samitier, Director of IBEC, Pablo Ordejon, Director of ICN2, Dolors Mateu, Manager of ICFO, Laia Pellejà, Manager of ICIQ, Joaquim Bosch, Manager of IFAE, and Margarida Corominas, Manager of IRB Barcelona. 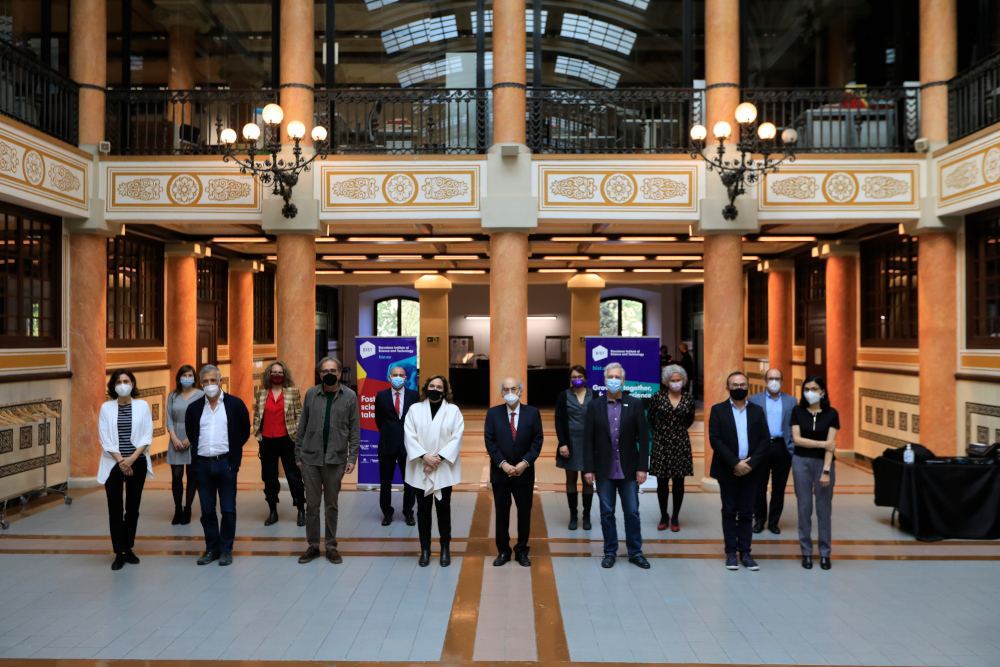 At the meeting, the main collaborative projects currently underway between BIST and the City Council were reviewed. Among these was the new research and innovation complex, promoted by BIST, CSIC, and the UPF, that will be built on the land of the Antic Mercat del Peix as part of the Ciutadella del Coneixement, a major municipal project. Within this complex, BIST will be building a 25,000 square metre building dedicated to precision medicine. Five of the best international architectural firms are currently competing to design the project.

The progress made on the Angeleta Ferrer Institute, which aims to become a reference centre for training in STEAM disciplines (Science, Technology, Engineering, Art, Mathematic), was also discussed. The new institute, which is promoted by the Generalitat’s Department of Education and the Consortium of Education of Barcelona, with the collaboration of BIST, is being completed on Barcelona’s Calle Marina and will be launched this September. It will continue to be a school in addition to being a unique centre where new strategies for science didactics will be put into practice, research in science education will be carried out, and teachers will be trained.

A third line of collaboration that was discussed at the meeting was science outreach and bringing research closer to society. The BIST centres carry out more than 400 outreach activities every year -most of them in the city of Barcelona- reaching more than 60,000 people. BIST also collaborates actively in the Ciutat i Ciència Biennal organised by the Barcelona City Council, with IBEC’s Dr. Nuria Montserrat as one of its commissioners. The next edition of the Biennial, which will be held June 8th-13th, will include various BIST coordinated activities to promote the visibility and recognition of women researchers, and to bring science closer to the city’s schools.

The Mayor of Barcelona, Ada Colau, thanked the BIST leaders for the opportunity to discuss the most relevant research projects they are leading and reiterated the City Council’s commitment to research, especially in terms of promoting knowledge and the active participation of society in scientific development, as well as creating the conditions for Barcelona to be an attractive city for internationally recognised researchers and entrepreneurs.

During the visit, the Mayor also referred to the creation of the working group to promote the candidacy of the future European Agency for Preparedness and Response to Health Emergencies (HERA).

For his part, the BIST President Andreu Mas-Colell underlined the commitment of BIST, and the seven centres that make it up, to put research excellence at the service of society, and to provide solutions to the great challenges we face in areas such as health and energy and environmental sustainability, which are critical for the future of large cities like Barcelona. “The pandemic that we are just beginning to overcome has made it clear that science will be key to the well-being of the next generations. For this reason, we are pleased to be building an alliance between our scientific community and an institution like the Barcelona City Council, which can develop innovative programmes to make it easier for women and men who do science to have the right conditions and the necessary support to work and transfer their knowledge to society.”