From new therapeutic approaches for Parkinson’s disease to the improvement of quantum computers: five new disruptive projects have been selected through the BIST Ignite programme.

• At the ceremony, which was held yesterday at the La Pedrera Auditorium, five new projects selected through the 2019 BIST Ignite Programme Seeding Phase were also announced for the first time.

• Dr. Serge Picaud from the Institut de la Vision (Paris), was the evening’s keynote speaker, with a presentation entitled “Restoring vision in blind patients: from dream to reality” 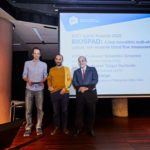 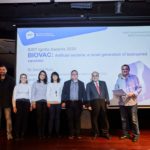 Yesterday, the Barcelona Institute of Science and Technology (BIST) presented the 2020 BIST Ignite Awards – which come with 50,000 Euros each – to BIOSPAD and BIOVAC to recognize the progress and continued potential for social impact of both projects. The BIOSPAD project is led by the ATLAS Pixels Group (ICREA Prof. Sebastian Grinstein) at the Institute for High Energy Physics (IFAE), the Medical Optics Group (ICREA Prof. Turgut Durduran) at The Institute of Photonic Sciences (ICFO) and the Radiation Detectors Group (Dr. Salvador Hidalgo) at the Institute of Microelectronics of Barcelona (IMB-CNM). BIOVAC is a collaboration between the Nanostructured Functional Materials Group (Prof. Daniel Ruiz) at the Catalan Institute of Nanoscience and Nanotechnology (ICN2) and the Bacterial Infections: Antimicrobial Therapies Group (Prof. Eduard Torrents) at the Institute for Bioengineering of Catalonia (IBEC).

Five new collaborations on the frontiers of knowledge

These five projects will being their research over the next eight months and will be eligible to compete for the 2021 BIST Ignite Awards. 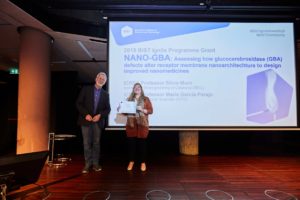 Alterations in the Glucocerebrosidase enzyme (GBA), which is essential for the metabolism of fats, are directly linked to rare diseases such as Gaucher’s disease, and to neurodegenerative disorders such as Parkinson’s. These alterations affect the cell membranes and the transport of natural substances or medicines from the blood to the brain. Silvia Muro, ICREA Professor at IBEC and expert in drug delivery, and María García-Parajo, ICREA Professor at ICFO and specialist in nanophotonics, have teamed up for the first time to investigate the workings of these biochemical and biophysical alterations in the cell membrane, the mobility and nanoclustering of receptors within the cell, and the transport of substances across the blood-brain barrier. The ultimate goal is to better understand the progression of diseases like Gaucher’s or Parkinson’s, in order to design new strategies for diagnosis and treatment. 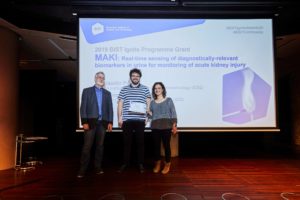 Acute renal failure (ARI) is a common complication in major surgeries, and until recently its detection was based on a single biomarker, an increase in creatinine in body fluids, which requires a slow analytical process to be detected. Recently, the neutrophil gelatinase-associated lipocalin protein (NGAL) has been identified as a much earlier biomarker in the ARI. The MAKI project, led by Dr. Claudio Parolo, from ICN2, and Dr. Gemma Aragay, from ICIQ, is developing a new method to simultaneously detect both biomarkers in urine samples, integrating in a single device a detector that reacts to the presence of creatinine producing fluorescence and an aptamer capable of detecting NGAL. The final goal of the project is to produce a portable sensor attached to a urinary catheter that allows creatinine and NGAL levels to be monitored with minimal effort by healthcare staff. 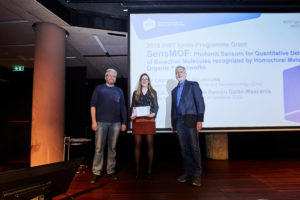 Enantiomers (optical isomers) are chiral molecules with the same composition of atoms, but arranged as mirror-images. This feature causes them to have the same physicochemical properties but to exhibit completely different behaviours in certain biochemical processes, for example when used in drug development or when designing strategies to eliminate pollutants containing enantiomers. The only way to distinguish between enantiomers is through their different interaction with polarized light, and currently the only technique available to identify and separate them is chromatography, an expensive and slow process. Industrial-scale purification of enantiomers is a challenge for the pharmaceutical industry. The SensMOF project, led by Dr. Leyre Gómez Navascués (ICN2) and ICREA Professor José Ramón Galán-Mascarós (ICIQ), will work on a solution by creating new optical nanosensors that integrate the enantio-separation capabilities already demonstrated by the so-called homochiral metal-organic frameworks, compounds composed of metal ions and organic ligands. The project will combine the expertise of the two participating teams to create a scalable prototype that addresses the current industrial challenges of scalability and process cost. 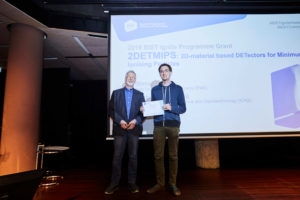 Advancement in particle physics research, key to understanding the foundations of the universe, requires the development of a new generation of lighter, faster, and cheaper sensors than today. The 2DETMIPS project, led by Dr. Stefano Terzo (IFAE) and Dr. Klaas-Jan Tielrooij (ICN2) explores the properties of graphene to produce a prototype sensor capable of detecting the passage of MIPs (Minimum Ionising Particles), a specific state of charged particles that allows studying energy fluxes within accelerators. Graphene has so far been studied as a light detector, but much less in the field of high energy physics, which is why one of the goals of the project is to determine graphene’s optimal substrates and geometries for these applications. 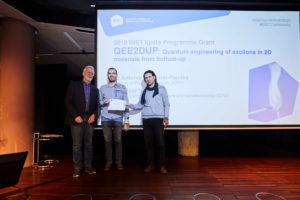 The development of new quantum technologies and their application in fields such as computing or communications require the design of new materials which combine chemical synthesis, 2D material nanofabrication, and advanced optics. This is the challenge posed by the QEE2DUP project, promoted by Dr. Antoine Reserbat-Plantey (ICFO) and Dr. César Moreno (ICN2). They will set out to design a new material capable of confining excitons – electronically neutral quasi-particles found in semiconductors and insulators – within graphene nanopores. This will allow for controlling the dynamics of excitons and answering fundamental questions about their physical properties, and serve as the basis for designing new “quantum chips” that will increase the security in communications, and the capabilities in quantum computing.

Returning vision to the blind

In 2018, the THEIA Ignite project, led by José Antonio Garrido, ICREA professor at ICN2, Dr. Pablo Loza-Álvarez (ICFO), Professor Mokhtar Chmeissani (IFAE) and Dr. Jeroni Nadal (Barraquer Clinic), received one of the first BIST Ignite Awards. Now, the collaborating has evolved into the iVISION project, with the Institut de la Vision in Paris joining as new member. The project has received a one million euro “la Caixa” Health Research Grant to continue developing a completely wireless, graphene-based retinal implant capable of restoring the vision of those who have been affected by retinitis pigmentosa.

To underline the importance of multidisciplinary collaborations and the BIST Ignite Awards, keynote speaker Dr. Serge Picaud, Director of the Visual Information Processing Department at the Institut de la Vision, summarized the progress made so far by iVISION.

Since the launch of the BIST Ignite programme, eight BIST Ignite Awards have been awarded
(THEIA, INWOC, GENSTORM, ENGUT, Q-SPET, PHASE-CHROM, BIOSPAD, BIOVAC), out of a total of 23 projects selected in the programme’s first phase, from 2016 to present. All together, these projects have received 860,000 Euros in funding and involved more than 170 researchers.

More information about the programme can be found on the BIST Ignite Page.