A study in Science reveals how a chemical bond breaks: Proton is seen escaping the molecule 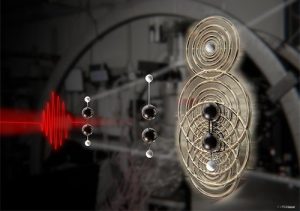 Imagine what it would be like to watch how the individual atoms of molecules rearrange during a chemical reaction to form a new substance, or to see the compounds of DNA move, rearrange and replicate. Such capability would give unprecedented insight to understand and potentially control the processes. The simple idea of watching how molecules break, or transform, during chemical reactions has, until now, been unfathomable since it requires tracking all of the atoms, which constitute a molecule, with sub-atomic spatial and few-femtosecond temporal resolution. Hence, taking such “snapshots” with a combined spatio-temporal resolution to witness a molecular reaction was considered fodder for science fiction. Exactly 20 years ago, one of the ideas proposed considered using the molecule’s own electrons to image its structure: Teach the molecule to take a selfie! The idea was brilliant but impossible to implement – until today.

In their recent study, reported in Science, ICFO researchers from the Attoscience and Ultrafast Optics Group in collaboration with researchers from the USA, the Netherlands, Denmark and Germany, have reported on the imaging of molecular bond breakup in acetylene (C2H2) nine femtoseconds (1 femtosecond = 1 millionth of a billionth of a second) after its ionization. The team was able to track the individual atoms of the isolated acetylene molecule with a spatial resolution as small as 0.05 Ångström – less than the width of an individual atom – and with a temporal resolution of 0.6 femtoseconds. What’s more, they were able to trigger the breakup of only one of the bonds of the molecule and see how one proton leaves the molecule.

“Our method has finally achieved the required space and time resolution to take snapshots of molecular dynamics without missing any of its events, and we are eager to try it out on other molecular systems such as chemical catalysts and bio-relevant systems” said Jens Biegert, ICREA professor at ICFO and leader of the research.