Science and Art: IBEC collaborates on artwork by Antoni Muntadas at Ars Electronica 2022

By Jenny KliverSeptember 26, 2022IBEC
No Comments

When is a living organism considered extinct? This is one of the fundamental questions posed by the artwork presented at Ars Electronica 2022 by Antoni Muntadas, a Catalan artist based in the USA and recognised worldwide. To address this question, the artist presented a piece of artwork about the Tasmanian tiger, with the collaboration of IBEC researcher Benedetta Bolognesi. The Barcelona Institute of Science and Technology (BIST) collaborated in the production of the project. 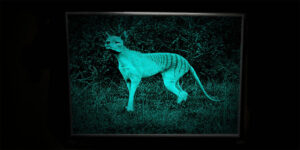 From September 7 to 11, 2022, Ars Electronica took place in Linz, Austria, an international reference event with 40 years of history. The annual event allows artists, scientists, and researchers from different countries to meet and discuss a specific and interdisciplinary topic from very different perspectives. This year, 953 people from 76 countries were involved in the Ars Electronica program, which received 71.000 visitors over the five days. The idea was to create a space for experimentation, evaluation, and reinvention with the aim of improving society. The permanent base of its activities is the Museum of the Future (Ars Electronica Center – Museum der Zukunft), where artistic fields, scientific domains, and technology are mixed to explore forms of interaction between human beings and our environment, exploring what our society will be like (or could have been like) in the future.

Antoni Muntadas, born in Barcelona and living in New York since 1971, is an international artist whose projects have been presented in several prestigious museums and galleries and whose work has been recognised and awarded on many occasions, including the National Prize for Plastic Arts and the Velázquez Prize for Plastic Arts. At Ars Electronica 2022, Muntadas presented the work “Tasmanian Tiger; Case Study of the Museum of Extinction”, with the scientific support of Benedetta Bolognesi, junior leader of the “Protein Phase Transitions in Health and Disease” group at the BIST centre IBEC, and the IBEC Department of Communication and Public Relations. The project was produced by the .NewArt { foundation;} in collaboration with HacTe (Hub of Art, Science and Technology), and the Barcelona Institute of Science and Technology (BIST).

“Welcome to planet B. A different life is possible, but how?” This was the theme of the 2022 Ars Electronica Festival, and in this context, Antoni Muntadas wanted to open a debate about extinction. What does it mean to be extinct? Can we consider a living being that no longer exists physically but is still present in the day-to-day life of a society and in its collective imagination through images, stories, beliefs… extinct? And if, in addition, a large part of the genome of that animal is still alive today in other animals, can we think that its genes are still alive in some way…

The work presented by the renowned artist Antoni Muntadas is based on the Thylacinus Cynocephalus, or Tasmanian tiger, a marsupial mammal from Australia declared extinct in 1936. The Tasmanian tiger is an example of how a legend is created through the mixture of fact, fiction, and popular myth. The idea for this project was born almost 30 years ago, when the artist was in Australia savouring a beer whose label had the image of a Tasmanian tiger. At that time the animal was already officially extinct, but it was still alive in the imagination of the people who spoke of it, without ever having seen it… 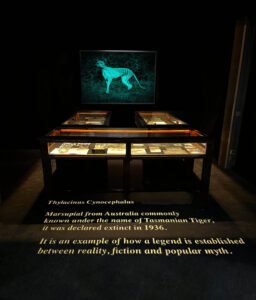 At the festival, cultural aspects related to the animal were shown as well as scientific data related to its evolution. For this second part, Antoni Muntadas and his team collaborated with IBEC. A scientific article published in the journal Nature Ecology & Evolution in 2018 was shown, in which the authors were able to sequence the genome of a young Tasmanian tiger from a marsupial pouch, preserved more than 108 years ago in ethanol in the Victoria Museum in Melbourne, Australia. From that sequence, they constructed phylogenetic trees that showed that the genomes of several living animals bear high levels of homology to the extinct Tasmanian tiger. An adaptation of one of those phylogenetic trees was featured in the artwork. In addition, the public was able to see the DNA sequence of the Tasmanian tiger on a screen, like a “rain of data”.

As in previous years, Ars Electronica 2022 aroused the interest of the media, with 258 representatives from 31 countries accredited for the event, including BBC, ARTE, and Wired Japan. In this context, the work of Antoni Muntadas and the Tasmanian tiger was a great success and was very well received by national and international critics, achieving its goal of making people reflect on the meaning of extinction. From what moment is a living being considered extinct?