Resuscitating eyes to speed up clinical research for vision impairment

An international consortium of researchers is developing a new method to bring eyes back to life from deceased body donors for clinical research purposes. The group is coordinated by Pia Cosma of the BIST centre CRG and also includes Nuria Montserrat of the BIST centre IBEC. 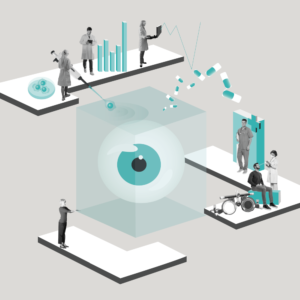 Coordinated by Pia Cosma from the Centre for Genomic Regulation (CRG, a BIST centre), the group is creating a device that resuscitates eyes from the dead. The research group will develop artificial blood to provide cells with oxygen and nutrients, kick-starting the activity of nerve cells and restoring total eye function. Artificial vitreous humour will maintain the eye’s ocular pressure.

The device, codenamed ECaBox, will be a transparent, cubic box that mimics conditions in the living human eye, maintaining the eye’s temperature and pH levels while avoiding blood clots and removing metabolic waste and toxins.

The project has been awarded 3.5 million euros by the European Union’s Future and Emerging Technologies Open Research Programme, which funds radical new technologies.

Current technological limitations mean that eyes can only be kept at 4ºC for a period of 48 hours before irreversible degradation occurs. This greatly limits their use for experiments, particularly to test the effectiveness of new drugs and treatments.

While advances in human organoids (growing tissues in a petri dish) are successfully mimicking the function of the eye, they fail to encapsulate the eye’s physiological complexity, such as its immune, vasculature, and metabolic systems.

The new method will circumvent these limitations by reviving eyes and maintaining them healthy for at least one month, helping researchers assess the efficacy, efficiency, and safety of new regenerative therapies and drug testing. Using resuscitated eyes can also bypass several ethical restrictions of preclinical animal testing, as well as human experimentation.

“There are a huge number of potential new treatments and therapies for eye damage and vision loss, but the eye watering cost of running a clinical trial can mean they never reach the market,” says Pia Cosma, ICREA Research Professor, Group Leader at the Centre for Genomic Regulation (CRG, a BIST centre), and coordinator of the project. “Our new method can greatly improve the preclinical validation steps for these treatments, supporting the screening of a larger number of candidates and helping promising drugs escape the ‘valley of death’ imposed by cost-benefit analyses in the pharmaceutical industry.”

An early prototype of the device is expected to be built by the end of 2023. Upon completion, the group plans to use the device to test their own retinal regenerative therapies pioneered at the CRG.

“A theory developed in the late 90s suggests that fusing cells of different types can result in new hybrid cells that can differentiate into specialised retinal cells, but the technology to test how this works in practice has been limited,” says Cosma. “We will use this new device to explore this approach for the first time in human eyes, a therapeutic approach we pioneered at the CRG.”

ECaBox will be created by an interdisciplinary collaboration among seven research centres. In Barcelona, the project will be coordinated by Pia Cosma at the CRG in collaboration with two other Catalan centres – Ricardo Casaroli at the Universitat de Barcelona and Nuria Montserrat at the Institute for Bioengineering of Catalonia (IBEC).

International collaborators include King’s College London in the UK, the Association for the Advancement of Tissue Engineering and Cell Based Technologies & Therapies (A4TEC) in Portugal, AFERETICA in Italy and the Bar-Ilan University (BIU) in Israel.

More information can be found on the CRG website.