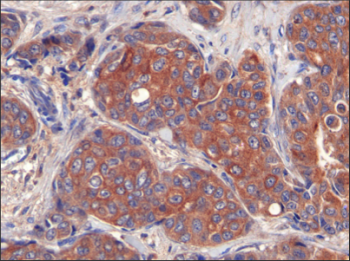 In an article published in Nature Communications,scientists at IRB Barcelona reveal that breast cancer cells require fatty acids from the extracellular environment in order to continue proliferating.
A study headed by the Institute for Research in Biomedicine (IRB Barcelona) and in collaboration with hospitals around Spain and the Universitat Rovira i Virgili (URV) has unveiled breast cancer dependence on lipids. This discovery could pave the way for new therapeutic strategies to fight the disease.

In an article published in Nature Communications, the researchers report that breast cancer cells need to take up lipids from the extracellular environment in order to continue proliferating. The main protein involved in this process is LIPG, an enzyme found in the cell membrane (the layer that surrounds a cell) and without which tumour cell growth is arrested. Analyses of more than 500 clinical samples from patients with various kinds of breast tumour reveal that 85% have high levels of LIPG expression.

In Spain, breast cancer is the most common tumour in women and the fourth most common type in both sexes (data from the  SEOM, 2012), registering more than 25,000 new diagnoses each year. According to figures from the World Health Organization, every year 1.38 million new cases of breast cancer are diagnosed and 458,000 people die from this disease (IARC Globocan, 2008).

It was already known that cancer cells require extracellular glucose to grow and that they reprogram their internal machinery to produce greater amounts of lipids (fats). The relevance of this study is that it reveals for the first time that tumour cells must import extracellular lipids to grow.

“This new knowledge related to metabolism could be the Achilles heel of breast cancer,” explains ICREA researcher and IRB Barcelona group leader Roger Gomis, co-leader of the study together with Joan J. Guinovart, director of IRB Barcelona and professor at the University of Barcelona. Using animal models and cancer cell cultures, the scientists have demonstrated that blocking of LIPG activity arrests tumour growth.

“What is promising about this new therapeutic target is that LIPG function does not appear to be indispensable for life, so its inhibition may have fewer side effects than other treatments,” explains the first author of the study, Felipe Slebe, who was funded by a “la Caixa” International PhD fellowship. Guinovart comments that, “because LIPG is a membrane protein, it is potentially easier to design a pharmacological agent to block its activity.”

LIPG has “many virtues” as a target. “If a drug were found to block its activity, it could be used to develop more efficient chemotherapy treatments that are less toxic than those currently available,” says Gomis.

The scientists are now looking into international collaborations in order to develop LIPG inhibitors.

The study has involved the participation of the teams headed by Joan Albanell at the Hospital del Mar, Ana Lluch at the Hospital Clínico de Valencia, Federico Rojo at the IIS-Fundación Jiménez Díaz and Óscar Yanes at the Center for Omic Sciences of the Universidad Rovira i Virgili in Tarragona.

The research has been funded by the BBVA Foundation, the Spanish Ministry of the Economy and Competitiveness and the Diabetes and Associated Metabolic Diseases Networking Biomedical Research Centre “CIBERDEM”, and ERDFs.