Barcelona, January 17, 2023. The research projects EXPLODE-TNBC, led by Dr. Antoni Riera (IRB Barcelona) and Dr. Sara Sdelci (CRG), and TeraFox, led by Dr. Ekaterina Khestanova (ICFO) and Dr. David Pesquera (ICN2), have won the 2022 BIST Ignite Awards. These awards recognise the two most promising projects among the five selected in the “seed phase” of the fifth edition of the BIST Ignite Programme, an initiative by the Barcelona Institute of Science and Technology (BIST) to promote multidisciplinary ground-breaking research through collaboration among groups from the seven research centres of the BIST community. Since its launch in 2016, the BIST Ignite Programme has invested more than one million euros in cutting-edge research projects.

The two winning projects will receive 50,000 euros each to begin a second research phase, which will further advance their results. The first results of these projects will be presented at the 2023 BIST Conference in November. 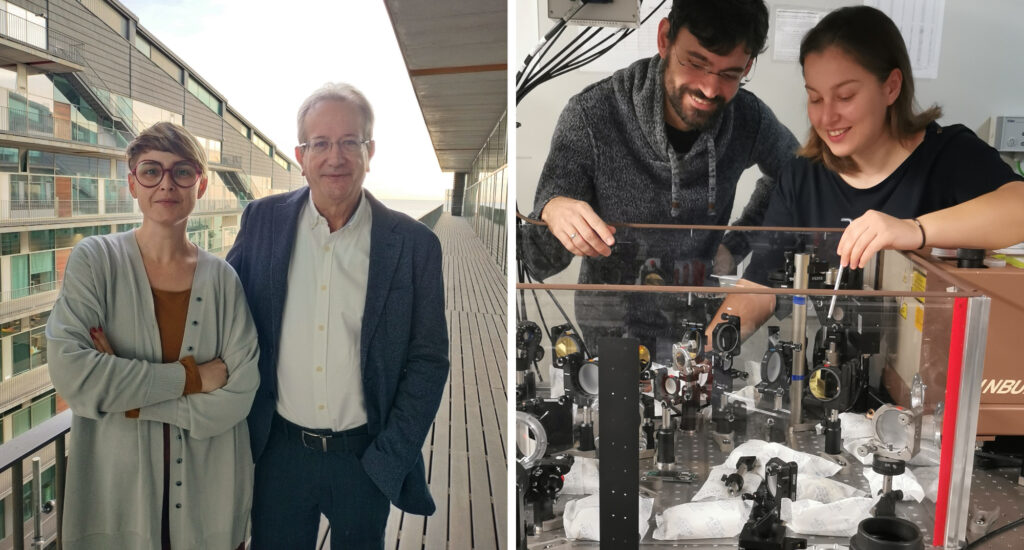 This project is made possible through the collaboration of researchers with different expertise – Dr. Sdelci and Dr. Riera – and a common goal: to improve the outcome of triple-negative breast cancer (TNBC) treatments. TNBCs, which represent 15% of all breast cancers, are currently treated with chemotherapeutic regimens, which unfortunately have very poor results.

Previous results from the Sdelci Lab had shown that the enzyme IMPDH2 is enriched in the cell nucleus of TNBC cells. The cytoplasmic function of IMPDH2 is well studied and it is required for normal cell homeostasis. Therefore, inhibiting the enzyme would have toxic effects. Dr. Sara Sdelci, leader of the Cancer Epigenetics and Metabolism group at the Centre for Genomic Regulation (CRG), thought that degrading the IMPDH2 enzyme located only in the cell nucleus could be a good approach to treat this type of cancer. To do so, she teamed with Dr. Antoni Riera, head of the Research Unit on Asymmetric Synthesis at the Institute for Research in Biomedicine (IRB Barcelona), who is an expert in the synthesis of biologically active compounds, including PROTACs. These compounds are bifunctional molecules that can induce the degradation of a targeted protein using the cellular natural mechanisms. In the first phase of the project, Riera’s research group synthetised several bifunctional molecules that were tested at Sdelci’s laboratory. Although the expected IMPDH2 degradation did not occur with the tested PROTACs, Sdelci’s research group advanced the understanding of the biology behind the unexpected nuclear accumulation of this enzyme in TNBC, discovering its implication in protecting cancer cells from death.

Now, thanks to the BIST Ignite Award, the multidisciplinary team will continue working on the development of the presumed therapeutic molecules and test them in combination with DNA damage agents in patient-derived tumoroids. “We are very determined in identifying IMPDH2 nuclear PROTACs molecules that we propose for the treatment of TNBC”, explains Dr. Riera. “We expect that these compounds will give fewer adverse effects than commercially available IMPDH2 inhibitors, and should be more effective in the repression of TNBC growth because they specifically target the nuclear action of the enzyme”, adds Dr. Sdelci.

The TeraFox project brings together two research groups with complementary material science and photonics backgrounds. Led by the postdoctoral researchers at ICFO, Dr. Ekaterina Khestanova, and at Catalan Institute of Nanoscience and Nanotechnology (ICN2), Dr. David Pesquera, the project seeks to develop a more efficient method to control the functional properties of Transition Metal Oxides (TMOs). These materials are of great interest in research and industry due to the stunning variety of their electronic and magnetic properties.

Traditionally, attempts to manipulate TMO properties have been carried out by altering the chemical composition or acting on the structure of the compound. Researchers at ICN2 and ICFO teamed up to try a different approach: to use light.

In the first phase of the BIST Ignite project, researchers targeted the atomic vibrations –phonons, which in TMOs govern many of the material’s interesting properties and are known to be susceptible to Terahertz (THz) light –electromagnetic radiation that lies bettween the microwave and far infraded. By neighbouring thin films of the selected TMO materials with THz high-refraction-index medium (which works to concentrate the THz field), the researchers found indications of modified atomic vibrations and enhanced responses to electrical fields in these TMO compounds. These preliminary results look promising and thanks to the BIST Ignite Award, will be explored further.

“We have initiated an original and exciting research direction which hopefully will be fruitful and impactful for the scientific community”, explains Dr. Khestanova. “The possibility of engineering properties of TMO’s with photonic cavities will open up a plethora of new possibilities, not only interesting from a fundamental physics point of view, but also for introducing the exotic functionalities of TMO’s into novel device concepts”, adds Dr. Pesquera.