By Jenny KliverNovember 9, 2022ICN2
No Comments

A paper recently published in Light: Science & Applications demonstrates that quantum materials of the topological insulator family can efficiently upconvert electromagnetic radiation in the terahertz (THz) regime. These results open new avenues for THz photonics technology and its application in sensing, homeland security, and sixth-generation mobile communications. The study was conducted by a team of researchers coordinated by ICN2 group leader Dr Klaas-Jan Tielrooij. 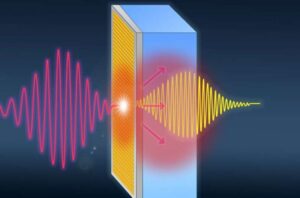 Terahertz light, radiation in the far-infrared part of the emission spectrum, is currently not fully exploited in technology, although it shows great potential for many applications in sensing, homeland security screening, and future (sixth generation) mobile networks. Indeed, this radiation is harmless due to its small photon energy, but it can penetrate many materials (such as skin, packaging, etc.). In the last decade, a number of research groups have focused their attention on identifying techniques and materials to efficiently generate THz electromagnetic waves: among them is the wonder material graphene, which, however, does not provide the desired results. In particular, the generated terahertz output power is limited.

Better performance has now been achieved by topological insulators (TIs) – quantum materials that behave as insulators in the bulk while exhibiting conductive properties on the surface—, according to a paper recently published in Light: Science & Applications. This study was carried out by members of the Ultrafast Dynamics in Nanoscale Systems Group at the BIST centre ICN2, led by Dr Klaas-Jan Tielrooij; and of the High-field THz Driven Phenomena Group at the Helmholtz-Zentrum Dresden-Rossendorf (HZDR, Germany) –led by Dr Sergey Kovalev–, in collaboration with researchers from the ICN2 Physics and Engineering of Nanodevices Group, headed by ICREA Prof. Sergio O. Valenzuela, from the School of Physics and Astronomy of the University of Manchester (UK), and the Physics Institute of the University of Würzburg (Germany). The experiments were performed at the TELBE THz facility in Dresden.

Earlier studies had shown that materials which host electrons with zero effective mass enable efficient generation of terahertz harmonics, including the aforementioned graphene and topological insulators. The phenomenon of harmonic generation occurs when photons of the same frequency and energy interact non-linearly with matter, leading to the emission of photons whose energy is a multiple of that of the incident ones. This can be exploited, for example, to upconvert electronically generated signals in the high GHz regime into signals in the THz regime.

Dr Tielrooij and colleagues investigated the behaviour of two topological insulators –the prototypical Bi2Se3 and Bi2Te3– in direct comparison with a reference graphene sample. They observed that, while the maximum power of the harmonics generated in graphene is limited by saturation effects (which arise at high incident powers), in these quantum materials it continued to increase with the incident fundamental power. The performed experiments revealed an improvement in generated output power by orders of magnitude over graphene, approaching the milliwatt regime.

This significant divergence in behaviour is due to the fact that topological insulators can rely on a highly efficient cooling mechanism, in which the massless charges on the surface dissipate their electronic heat to those in the rest of the thin film. In other words, bulk electrons lend a helping hand to the surface-state electrons by sinking electronic heat. The highest output power for the terahertz third-harmonic –i.e. radiation with three times the same energy– was achieved in a metamaterial that contained a topological insulator film together with a metallic grating –consisting of metal strips separated by gaps on the surface of the material.

“In this work we demonstrate that the saturation effect occurring in graphene is much less detrimental in topological insulators. This occurs thanks to a novel cooling mechanism between surface and bulk electrons of topological insulators,” explains Dr Klaas-Jan Tielrooij, first author of the paper. “These quantum metamaterials thus bring nonlinear terahertz photonics technology a big step closer.” Sergey Kovalev, last author of the paper, adds: “The obtained results furthermore offer interesting possibilities towards studying the quantum properties of these materials with prospects towards quantum technologies.”