Shine on you crazy protein: The QSPET Ignite project

It’s fall 2017, it’s been a year since I joined IBEC’s Nanoprobes & Nanoswitches group for an amazing adventure of unraveling the wonders of the plant’s photosynthetic protein complex. We face a great challenge for two reasons. One, the mesmerizing, wet, crumbling, self-assembled crazy puzzle that constitutes life comes without an instruction manual and evolution doesn’t have a tech support number. Two, plants use photosynthesis to convert sunlight into chemical energy. Light-matter interactions are described by quantum mechanics, in which case we have an instruction manual but is not a simple one. However, heroes know that the harder the journey, the greater the reward. Photosynthesis is the energy pump of the life cycle on earth, a crucial process optimized for millions of years. If we can understand it, we might develop a renewable energy source to meet society’s demands.

Biologists, chemists and physicists worldwide have pursued this quest for decades, sharing their knowledge, experience and discoveries. Among these scientists, we find the ICFO’s Niek Van Hulst group who studies the quantum coherent energy transfer in light harvesting complexes, that is, how chlorophyll-pigment antennas capture photons. Back then, I ignored who Niek was or what the coherent quantum energy transfer meant. A note for 2017 me: coherences are delocalized electronic states, which mean that many pigments are excited together by light and act collectively. These collective states are eventually disrupted by thermal disorder, but in photosynthetic antennas they last long enough to transfer energy to a neighboring protein reaction centre where photon excitation is converted into an electron.

In fact, I didn’t know much about the photosynthetic complexes and our group had just started working with them a year ago. My supervisor Pau Gorostiza’s group expertise was protein electron transfer at a single molecule level. Biochemical reactions are electron exchanges, so what we do is glue proteins to a piece of metal and probe them with a metallic tip that we place just above the proteins, making a metal-protein-tip sandwich. Our goal is to find how electrons migrate in and out of these proteins. In the photosynthetic complex, these electrons come from the above mentioned reaction centre that converts pigment collective excitations to electrons. We are interested in how the photosynthetic complexes exchange electrons with the partners that surround them in the cell.

White light is the sum of all colours or wavelengths, so when we perceive a coloured object we see the light that was reflected by the object, all the light that was not absorbed by it. Plants are green because the chlorophyll pigments absorbs blue and red wavelengths. In fall 2017, I was illuminating my proteins with a wavelength-matched LED, in other words, a red light. Matches get very hot when they ignite, reaching a temperature close to that of the surface of the sun and emitting all of the colours, like the sun does. We needed those colours, we needed to ignite, to shine them on our photo-to-electron converter protein. 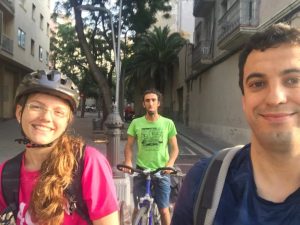 Once our Ignite project began, Jana Ockova and Luca Bolzonello joined the project and they do know how to shine! Together, we planned to go deeper into the light absorption mechanism of the plant photosynthetic complex. We addressed the coherence time of the excited states of the pigments shining on them with a femtosecond pulsed laser. Femtosecond is the time/energy scale of the pigments’ excitation, so we could recover the electrical current output of this coherences. These results granted us the second phase of the ignite project.

Now we want go even deeper and are studying how the exited states interact within themselves. Isn’t it exciting?