By Jenny KliverJuly 7, 2021BIST
No Comments

• Prof. Ana Tajadura-Jiménez has been awarded the Banco Sabadell Foundation Award for Science and Engineering for her research on the design of sensory technology to change people’s perception of their own bodies in real time, creating Body Transformation Experiences. BIST has once again participated in organising the award this year.

• Dr. Guadalupe Sabio has been awarded the Banco Sabadell Foundation Award for Biomedical Research for her research on obesity and its relationship with cardiometabolic diseases. 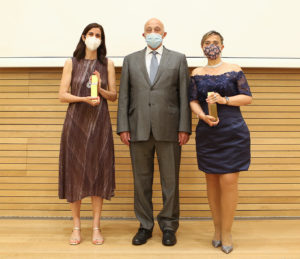 The jury of this year’s Banco Sabadell Foundation Award for Biomedical Research, presided over by Dr. Oscar Marín, recognised Dr. Guadalupe Sabio Buzo, CNIC Researcher with a PhD from the University of Extremadura, in collaboration with the British Medical Research Council in Dundee (Scotland), for her research on understanding why obesity causes cardiometabolic diseases.

Her studies analyse factors that arise in people with obesity, such as the alteration of fat, the deregulation of internal clocks, and cellular stress, which could cause the onset of these diseases. In particular, she is interested in understanding the role of fat as an endocrine organ that regulates the development of obesity-associated diseases such as diabetic cardiomyopathy. In fact, her studies have shown that the greater predisposition to developing cancer in men may be due to differences in the endocrine function of their fat.

The Guadeloupe group is involved in many activities to promote science to children and especially to motivate young girls. To this end, the group has organised and participated in a number of outreach events, school talks, and various science fairs.

Guadalupe Sabio is a researcher at CNIC where she leads a group of ten researchers. Dr. Sabio studies the role of the stress kinase signalling pathway in the development of metabolic diseases and cancer. Her results show that p38 could become a good therapeutic target for inflammatory diseases in the fight against the side effects of obesity, and in the treatment of liver cancer and fatty liver. Her work in these fields has been published in prestigious journals such as Nature, Cell Metabolism, PNAS, Plos Biol, Journal of Clinical Investigation, Nature Communications, and the EMBO Journal.

The Banco Sabadell Foundation Award for Science and Engineering, organised in collaboration with the Barcelona Institute of Science and Technology (BIST), is celebrating its fifth edition this year. The award jury, presided over by BIST President Prof. Andreu Mas-Colell, recognised Prof. Ana Tajadura-Jiménez, who holds a PhD in Applied Ethics from the Chalmers University of Technology in Sweden, for her research on the design of sensory technology to change people’s perception of their own bodies in real time, creating Body Transformation Experiences.

Dr. Ana Tajadura-Jiménez is an associate professor in the Department of Computer Science at Universidad Carlos III de Madrid and at the University College London Interaction Centre.

Her multidisciplinary research interests range from engineering and applied acoustics to human-computer interaction (HCI) and cognitive neuroscience. She is passionate about wearable interaction technologies to promote people’s physical and emotional health.

Throughout her research career, she has led international multidisciplinary teams and projects, which have focused on advancing body perception research through technology and designing body-centred interfaces that support people’s needs. She has worked with physicians on studies with physically inactive people, and people with chronic pain, eating disorders, and stroke.

Her research won her the Excellence Award in 2019 from the Consejo Social de la Universidad Carlos III de Madrid. She also recently received a “Consolidator Grant” from the European Research Council to carry out research for the next five years on new paradigms and technologies for body-transforming experiences, and to study their impact on motor, emotional and social functioning. Her research has been published in more than 45 journal articles, four book chapters, and more than 100 contributions to scientific conferences.

Prof. Tajadura-Jiménez is very committed to the public dissemination of science and the role of women in science and technology.