Núria López-Bigas of the Institute for Research in Biomedicine (IRB Barcelona, a BIST centre), has been awarded the National ‘Doctores Diz Pintado’ Cancer Research Prize. 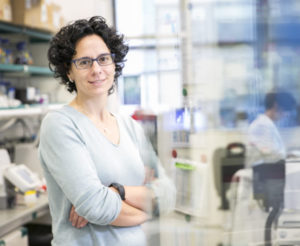 Núria López-Bigas, ICREA Researcher and Head of the Biomedical Genomics Lab at IRB Barcelona, has received the IX National ‘Doctores Diz Pintado’ Cancer Research Prize for her exceptional contributions. The jury highlighted the relevance and impact of López-Bigas’ work, which focuses on genomics and has wide applications in personalized medicine. The researcher is the first female scientist to be presented with this prize.

Using pioneering bioinformatics techniques, López-Bigas and her team study the mutations that underlie cancer and the mutational processes that make the genomes of our cells accumulate thousands of mutations. One of the lab’s most outstanding achievements is the development of IntOGen and CancerGenomeInterpeter, two technologies that can be used to analyze alterations in cancer cells.

The lab has made several important discoveries related to the accumulation of genomic mutations. One such example is a recent study in which they examined the genome of more than 3500 metastatic tumour samples from patients who had received cancer treatment (chemotherapy, radiotherapy and anti-tumour treatments). The scientists observed that each of these treatments was associated with a specific mutational signature. This breakthrough is a first step toward understanding the long-term side effects of such treatments and optimizing therapies for cancer.

An expert in medical genetics, computational biology, and bioinformatics, López-Bigas received her PhD from the University of Barcelona. During her PhD studies, she addressed the causes of hereditary deafness. Later she joined the European Bioinformatics Institute in Hinxton (Cambridge, UK) to work in the field of Computational Genomics. In 2006, she moved to Pompeu Fabra University to head the Biomedical Genomics group. In November 2016, she joined IRB Barcelona.

More information can be found on the IRB Barcelona website.