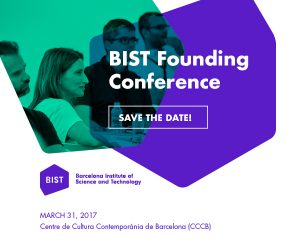 The Barcelona Institute of Science and Technology was established to promote collaboration among six of Catalonia’s top research centres (CRG, ICFO, ICIQ, ICN2, IFAE, and IRB Barcelona) and to push the frontiers of knowledge ever further by igniting multidisciplinary research through building common scientific projects among these centres.

BIST has had an initial consolidation period and is now at a point where its dream has been made a reality.

The BIST Founding Conference, the first international scientific meeting organized by BIST, aims to promote the debate on multidisciplinary scientific research and its impact on advancing the frontiers of knowledge. The conference will also allow us to explore the latest scientific advances in the four areas that the BIST has identified as strategic for the development of multidisciplinary projects: chemical biology, graphene, big data and microscopy.

The conference program is envisioned as a high level meeting and will allow us to formally introduce our scientific objectives and strategic vision for BIST. We are excited to have many prominent speakers joining our conferences including Jean Pierre Sauvage (Nobel Prize in Chemistry, 2016) and two other Nobel Laureates pending confirmation.

The conference will take place from 9am to 6:30pm (followed by a cocktail networking session) on March 31, 2017 at the Centre de Cultura Contemporània de Barcelona (CCCB) in central Barcelona.

Attendance is by invitation and more information will be made available soon.