By Adela FarréNovember 29, 2016CRG
No Comments 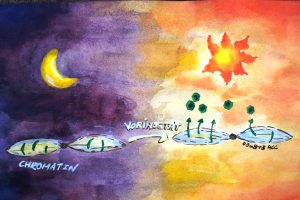 A group of researchers at the Centre for Genomic Regulation (CRG) and the Pompeu Fabra University (UPF) in Barcelona, Spain, have developed a new technology that sheds light on the HIV infection and offers a first glance at the expression landscape of the HIV in the human genome.

After entering the genome of an infected cell, a fraction of the viruses becomes dormant and hence escapes detection by our immune system. These viruses escape therapy treatment and remain a threat for the patient because, at a later time, they will spontaneously awaken and restart the infection cycle. Many current therapies and available drugs aim to reactivate latent HIV in the hope of clearing the latent virus population. Unfortunately, none of the proposed therapies have proved as yet effective to cure infected patients. Foreign viral DNA is silenced in the human genome by the host chromatin, which is a complex of DNA and proteins wrapping and condensing the DNA to form chromosomes.

Chromatin silencing is mediated by several mechanisms and now a team of researchers led by Guillaume Filion, group leader of the Genome Architecture laboratory at the CRG, have developed a technology aimed at discovering the role of the chromatin silencing in the response of latent HIV to the currently available drugs.

As reported in the article recently published by Nature Structural and Molecular Biology, they developed a technology called B-HIVE, which allowed them to map the HIV inserts within the human genome as well as to measure their expression levels. “We barcoded a population of viruses with a genetic identifier. With the barcodes, we were able to link an individual virus to its chromosomal location” explains Filion, the leading author of this study. Genetic barcoding works like the barcodes of food products in supermarkets: after all the items are labeled, each individual item can be identified by its specific code. “Also, we were able to measure their expression levels and showed that the response of HIV to reactivation therapies partly depends on the integration site in the human genome. For the first time, it shows the practical relevance of the chromatin context in the fight against HIV”, states the researcher.

With the use of this new technology, the researchers were able to show that different HIV reactivation drugs reactivate HIV from different locations within the chromosome. In other words, these drugs are more selective than previously thought. “Having this technique in hand, we can now search for the best drug mix that can reactivate all the latent viruses that up to now were hiding from the antiretroviral drugs in use today and make them susceptible to destruction” says Heng-Chang Chen, CRG researcher and first author of the study.