By Adela FarréDecember 7, 2016ICIQ
No Comments 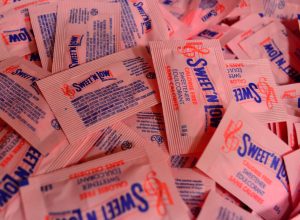 Despite not being totally calorie-free sweeteners, polyalcohols are widely used in the food industry. They are particularly common in sweets, gums, and toothpaste for two reasons: they produce a sensation of freshness in our mouth and they don’t contribute to tooth decay.

Some of these polyalcohols may be found in nature. However, isolation is uncommon, and industrial synthesis is often preferred. Normally, industries use biochemical processes where enzymes prepare polyalcohols from sugars. But these systems are far from ideal; they require meticulously controlled temperatures, concentrations, and pH, which hinder big-scale production.

Now, scientists at ETH and ICIQ came up with a solution based in heterogeneous catalysis, a common approach in industry –oil cracking, car catalysts, synthesis of ammonia are just some examples. The idea combines a first step where sugar atoms are reorganized thanks to a molybdenum-based catalyst and a second hydrogenation step catalysed by ruthenium. This method allows researchers to obtain valuable polyalcohols like mannitol or ribitol from cheap and widely available products like glucose or arabinose.

The team at ICIQ, led by Prof. Núria López, carried out the computer simulations that helped improve the design of the catalysts. “Thanks to the powerful resources of the Barcelona Supercomputing Center and the Spanish Supercomputing Network we were able to model catalytic processes with an unprecedented level of precision and complexity”, says López. “This new approach increases the potential applications of biomass in industry”, she concludes.