Researchers from BIST centres IRB Barcelona and ICN2 were among the winners of the Vanguardia de la Ciencia Prize this year.

The “Vanguardia de la Ciencia” Award, a joint initiative of the La Vanguardia newspaper and the Fundació Catalunya-La Pedrera, seeks to increase the visibility of scientists conducting frontier research and to bring this research closer to society. Candidate selection is based on two criteria, namely the excellence of the research and that this research has been headed by a Spanish institution.

The winning projects for this year’s prize with BIST researchers are:

Second place: The origins of autism, led by researchers from the Institute for Research in Biomedicine (IRB Barcelona) and Centro de Biología Molecular Severo Ochoa

The second place prize has gone to a project on the origins of autism led by Dr. Raúl Méndez (IRB Barcelona) and Dr. José J. Lucas (Centro de Biología Molecular Severo Ochoa in Madrid). They addressed the influence of CPEB proteins in Huntington’s disease when they discovered that these proteins orchestrate the genome, which regulates the activity of thousands of genes. CPEB proteins determine whether these genes are activated or silenced at the correct time during embryonic development. The scientists observed that in mouse models of Huntington’s disease, the alteration in CPEBs affected the genes associated with predisposition to autism. Published in the journal Nature, the study concludes that a defect in CPEB4 could be the link between environmental factors that alter brain development and the genes that determine susceptibility to autism.

Third place: Nanoporous graphene led by researcher from the Catalan Institute for Nanoscience and Nanotechnology (ICN2) 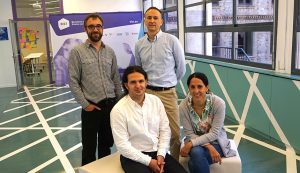 The awards ceremony will be held on April 4th, 2019 at LaPedrera, where researchers will present their work to a general audience. We would like to congratulate all the winners and thank all the readers who voted in this contest. We invite you to join us in the celebration of this prestigious recognition.