By Jenny KliverNovember 4, 2022ICFO
No Comments

Researchers together with the outreach and communications teams at the BIST centre ICFO have come together to carry out the NightUp citizen science experiment, aimed at using smart phone cameras to analyse the scientific features of street lights in multiple urban areas. 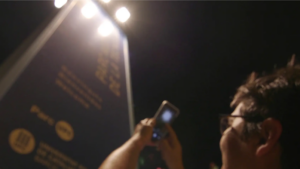 If you have ever flown on an airplane at night, you have probably looked through the window down to the ground below with awe. The intricate patterns that form illuminated laces and cobwebs on the surface of the Earth are more than a breathtaking view: they also provide a lot of information to expert eyes. Some indicators are easier to obtain, like for example the distribution span of human activities over the continents. With more elaborate calculations, scientists can also infer other ecological and economic parameters, such as landscape connectivity, CO2 emissions, or the GDP of different countries.

Artificial lights at night have a dark side, too: light pollution. Not only do they make it difficult to observe the night sky from Earth, but they also affect all kinds of living beings (flora, fauna, and even humans), altering the natural alternance of day and night, creating undesired biological consequences, and affecting the health of human beings.

Natural light has different colours, and each colour affects living beings in very different ways. It is therefore important to collect information not only about the brightness, but also about the colour of artificial light at night. Thus, a sensor that captures the different colours of artificial light at night would help improve the precision of economic and ecological parameters affected by night illumination, since actual estimations may be incomplete given that current sensors are blind to the blue region of the visible spectrum.

Few sources can obtain valuable spectral information about artificial light, the most prominent example being images taken from satellites. However, satellites either do not cover all of Earth’s surface or have low image resolution. To tackle the lack of data in urban areas, scientists conceived the NightUp citizen science experiment. Its main goal was to show that a wide range of low-cost and ubiquitous light sensors – smart phone cameras – can be used to characterise the colour spectrum of streetlights. A joint effort by the ICFO outreach and communications teams reached out and engaged untrained citizens, who volunteered to collect streetlight photos from their neighborhoods. At the same time, ICFO researchers Gorka Muñoz-Gil (now at Innsbruck University) and Alexandre Dauphin, together with Alejandro Sánchez de Miguel from Universidad Complutense de Madrid, developed an automatic method to analyse the images and rigorously extract information about the illumination colours in multiple urban areas.

Over the course of five months, the team carried out a pilot phase, where they gathered over 1000 photographs from more than 70 smartphone unique users living in urban areas of Castelldefels, Barcelona, and El Prat del Llobregat. The volunteers used a wide range of smartphones to take direct pictures of street lights at night. To that aim, the team developed the NightUp mobile application, which guided the users through the process and helped record useful additional data, such as the geolocation of the device, its accuracy, and the timestamp.

In order to benchmark their colour extraction algorithm, ICFO researchers validated it manually, showing that, for images taken correctly, the algorithm has almost perfect accuracy. Importantly, thanks to the collaboration with the city council of Castelldefels, the researchers had access to the public lights database of the city. This allowed for an extensive comparison between the images taken by the NightUp citizens and the ground real data. Moreover, it helped design a classification method able to distinguish different colours, which in some cases can be associated to specific lamp technologies, such as Sodium lamps.

In parallel and for data comparison purposes, the team retrieved an image taken from the International Space Station (ISS) of the Barcelona area for the same time period. After thorough data analysis processing, they compared the extracted colours with the ones gathered by the NightUp method. While the ISS image is able to cover a large area with a single photo, its very low spatial resolution is such that the colour of one pixel is the average of all streetlights contained in an area of approximately 25 square meters. Oppositely, in NightUp each photo contained one single lamp, increasing the resulting spatial resolution by many factors. Moreover, as lamps are built to point downwards, the ISS can only capture the reflection of the light from the ground, which may distort the spectrum of the light. Furthermore, the volunteers can reach light sources that, for the camera on the ISS, may be masked by obstacles (such as tree canopies) in the line of sight, making them invisible to the space station, but that still affect living beings on the surface of the Earth.

As Gorka Muñoz-Gil comments “the experiment was in fact a test to show that citizen science experiments can improve the collection of data in critical topics for our society. It not only allows for a better analysis of light pollution, but can also be used as a channel to raise awareness about this important phenomenon”.

Federica Beduini, from the outreach team at ICFO and coordinator of the NightUp, pinpoints “an experiment like NightUp shows us how ubiquitous photonics sensors, like smartphone cameras, allow anyone to collaborate with scientists and contribute to the advancement of science.”

The NightUp study has proven that “smartphones can definitely become small laboratories in your pocket”, as Beduini highlights, and that with a very little device, citizens can successfully carry out the gathering of information for researchers who can benefit from all this data for a scientific purpose. The study shows that the NightUp approach is scalable to larger areas and that it retrieves useful high-quality data for scientists working on the study of light pollution, as well as for local governments to optimise outdoor lighting and address light pollution effectively.

This work is part of the R&D project CEX2019-000910-S, funded by MCIN/AEI/10.13039/ 501100011033/, from Fundació Cellex, Fundació Mir-Puig, and from Generalitat de Catalunya through the CERCA program. Project cofinanced by the Diputació de Barcelona and the Castelldefels City Council through the BiblioLab program (21296).