Keysight Technologies, the American company world leader in test and measurement solutions, has acquired the start-up Signadyne, a spin-off born at ICFO-The Institute of Photonic Sciences. The company, with expertise in modular measuring equipment, received the financial support of Caixa Capital Risc, the venture capital arm of la Caixa and Fitalent, everis venture capital fund. The agreement has been led by the consulting firm ImpulsetoGrow.

Signadyne was founded in December 2010 by engineers Dr. Marc Almendros and Dr. Nestor Oliverio. Marc did his PhD under the supervision of Prof. Jürgen Eschner, currently at the Universität des Saarlandes (DE) and Nestor was a research engineer under the supervision of Prof. Turgut Durduran and Prof. Morgan Mitchell. Marc and Nestor discovered that the test and measurement equipment needed for performing a quantum optics experiment did not exist on the market. After a period of incubation in the ICFO LaunchPad, an ICFO support area and facility that allows innovative ideas to be converted into technological spin-offs, the technology and business plan matured and, thus, Signadyne was created, a company with cutting-edge technology in the field of modular tests and measurement, which would develop the equipment required for their experiments. 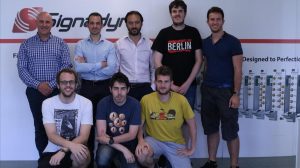 Based on the PXI standard concept and with the use of different test modules, Signadyne is capable of developing tailored equipment for specific applications, in a quick and cheap way, unlike conventional test and measurement devices, which are designed almost specifically for the type of element that is being tested. In addition, Signadyne’s devices stand out for their capability of making many measurements in very short time intervals (up to 1Gs / s, one million samples per second), the amount of channels per device (the number of parameters measured at the same time) and their versatility and flexibility.
Upon the acquisition agreement, the idea of Keysight is to further develop the company’s cutting-edge technology and incorporate its products and technology to Keysight Technologies’s global solutions support, which leads the industry since Dave Packard and Bill Hewlett founded the company in their garage in Silicon Valley in 1937.