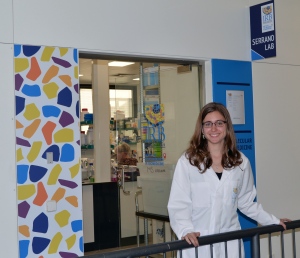 Last month the Institute for Research in Biomedicine (IRB Barcelona) welcomed 11 new PhD students into its ranks, among them special mention is given to Elena Meléndez Esteban. This 24-year-old from Barcelona is the first student to be awarded the “IRB Barcelona Futur” fellowship, which has come about through social altruism.

The new “Futur” fellowship is one of 11 included in IRB Barcelona’s International PhD Programme this year, but the only one that does not depend on public funding for PhD training as it is partially supported by donations given to the “Futur” fundraising campaign.

The fellowship, which brings with it 20,000 euros gross/year for the next four years, has been given to the student that was most highly ranked by this year’s candidate selection committee. Of note, all the applications received were considered outstanding. “I was so excited when I received the letter telling me all about the “Futur” fellowship,” Elena Meléndez explains. “I had never heard of any initiative of this kind. So many people have shown such generosity in supporting the PhD training of a young researcher that they don’t know. They are examples of altruism to be followed,” she says.

IRB Barcelona launched “Futur” at the end of 2016 to highlight and ask for support for two of the cornerstones of the centre: increasing public awareness of the need for biomedical research and providing outstanding training for young scientists from all over the world. Since IRB Barcelona was founded 12 years ago, 320 young researchers have obtained their PhDs at the centre and this year 107 students (70 women and 34 men)—30% of them non-Spanish nationals—are working towards their doctorates.

“Behind medical breakthroughs is the effort of thousands of biomedical researchers… people who are trained to understand human biology and to make discoveries that will become the medicine of tomorrow. Training scientists will be to all our benefit,” says Joan J. Guinovart, director of IRB Barcelona.

Given the positive public response to the first edition of the “Futur” campaign, the centre has made it a permanent initiative through which to channel donations to support young researchers. “Futur” has raised more than 12,000 euros from hundreds of donors and the company sponsors Merck, Promega and Waters.