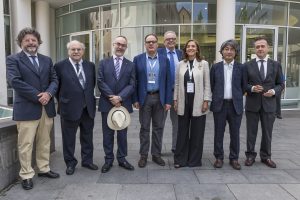 The Institute for High Energy Physics (IFAE) marked its 25th anniversary this year, making it the oldest of the BIST research centres.

IFAE, a consortium of the Generalitat de Catalunya and the Autonomous University of Barcelona, ​​celebrates the 25 years of its foundation this year. A celebration took place on July 7, with the participation of the Secretary of State for Research, Development and Innovation, Carmen Vela; The Secretary of Universities and Research of the Generalitat of Catalonia, Arcadi Navarro; The Vice President for Innovation and Strategic Projects of the UAB, Francisco Javier Lafuente; And the president of the Board of the Barcelona Institute of Science and Technology, Andreu Mas-Colell.

The main presentation was given by Professor Hitoshi Murayama, Director of the Kavli Institute for Physics and Mathematics of the Universe at the University of Tokyo and MacAdams Professor of Physics at the University of California at Berkeley. Other participants included the current Director of IFAE, Ramon Miquel, the Founding Director, Enrique Fernández, one of the main instigators in the creation of IFAE, Ramon Pascual, the former Director Matteo Cavalli-Sforza, and the Scientific Director of the Severo Ochoa Program, Manel Martínez. They all provided a vision of the past and the present of the Institute for High Energy Physics, and their role in international research in fundamental physics.