By Jenny KliverSeptember 26, 2017ICN2
No Comments 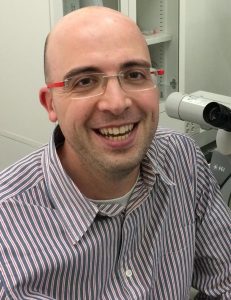 ICN2 Group Leader and ICREA Research Professor Jordi Arbiol has been appointed the new President of the Spanish Microscopy Society (SME), a national association that brings together all those who use microscopy and related techniques in their work.

Having previously held the vice-presidency from 2013 to 2017, Jordi Arbiol, ICREA Professor working at the Catalan Institute of Nanoscience and Nanotechnology (ICN2), was elected by its members as the new president, a position he will hold for the next four years.

Jordi Arbiol earned his PhD in the field of transmission electron microscopy applied to nanomaterials in 2001 from the University of Barcelona, where he then worked as an Assistant Professor. In 2009 he became an ICREA Research Professor and a Group Leader at the Institute of Materials Science of Barcelona (ICMAB-CSIC), also assuming the role of Scientific Supervisor of its electron microscopy facilities. Around this time he joined the ranks of the Executive Board of the SME, becoming Vice-President in 2013. After a flurry of high-profile awards in 2014, including the EU40 Materials Prize (E-MRS), the annual European Microscopy Society Outstanding Paper Award in the materials science category, and inclusion in The Analytical Scientist’s Top 40 Under 40 Power List, he joined the ICN2 in 2015 as leader of the Advanced Electron Nanoscopy Group.

The new Executive Board was elected this month at the 2017 Microscopy at the Frontiers of Science conference, organised every two years together with the Portuguese Microscopy Society (SPMicros).

More information can be found on the ICN2 website.