By Jenny KliverJuly 31, 2017ICFO
No Comments 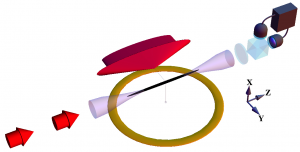 Schematic of the experimental set-up

Researchers at The Institute of Photonic Sciences (ICFO) have harnessed the weirdness of quantum entanglement to detect ultra-faint radio signals.

In a study published in Physics Review Letters, and highlighted by APS Physics, ICFO researchers demonstrate a new technique for the coherent detection of radio frequency magnetic fields using an atomic magnetometer. They use highly sensitive, nondestructive measurements to entangle the atoms, while maintaining their collective coherence, and a new technique to allow the coherent buildup of signal from arbitrarily shaped waveforms.

In this study, ICFO researchers Ferran Martin Ciurana, Dr. Giorgio Colangelo, Dr. Rob Sewell, led by ICREA Prof. at ICFO Morgan Mitchell, trap an ensemble of more than a million rubidium atoms which have been laser-cooled to 16 K, close to absolute zero. They apply a static magnetic field to the trapped atoms, so that the atomic spins precess (rotate) synchronously (coherently) at a precise frequency of 42.2 kHz, within the low frequency band used for AM radio broadcasting. They then apply a weak resonant radio frequency field in an orthogonal direction, which perturbs the atomic spin precession – this is the signal they want to detect.

More information can be found on the ICFO website about the researchers’ technique, which may have applications ranging from the detection of bio-magnetic fields, and characterization of micro-electronics, to searches for extra-terrestrial civilizations.