By Jenny KliverDecember 5, 2017ICFO
No Comments 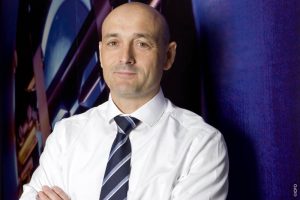 Professor Lluís Torner, physicist and founding Director of ICFO, The Institute of Photonic Sciences, has been awarded with the 2017 Nature Mentoring Award.

Four Spanish scientists have been recognized by Nature, the international weekly journal of science, for exemplary personal mentoring of other scientists. Nature has hosted these annual awards since 2005 to champion the importance of mentoring and inspiring a generation of young scientists. The 2017 awards have for the first time taken place in Spain.

At the ceremony held at the Spanish Royal Academy of Sciences in Madrid, Sir Philip Campbell PhD, the Editor-in-Chief of Nature, presented the awards and congratulated the recipients on their laudable contributions.

The joint-recipients of the mid-career achievement prize are:
Professor Carlos López-Otín, a molecular biologist from the University of Oviedo
Professor Lluís Torner, a physicist and founding Director of ICFO- The Institute of Photonic Sciences, in Barcelona.

The joint-recipients of the lifetime achievement award are:
Professor Carlos Belmonte, founding Director of the Institute of Neuroscience of Alicante
Professor Margarita Salas, former Director of the CSIC Centre for Molecular Biology Severo Ochoa in Madrid

Carmen Vela, the Spanish Secretary of State for Research, Development and Innovation commented on the importance of the awards: “Nature is an internationally renowned science journal in which researchers from around the world seek to publish their studies, so it is very important for us to recieve the ‘Nature Mentoring Awards’ here this year. Spain is a country full of talented scientists, and many of them have been guided by Margarita Salas, Carlos Belmonte, Carlos López-Otín and Lluis Torner, four great Spanish researchers. I would like to express my gratitude for their work over these years”.

More information can be found on the ICFO website.