By Jenny KliverNovember 12, 2018IBEC
No Comments

In a study published on October 31st in Nature by scientists from the Institute for Bioengineering of Catalonia (IBEC), a BIST centre, and UPC it was discovered that our cells can stretch beyond imaginable limits.

With every beat of the heart and every breath into the lungs, cells in our body are routinely subjected to extreme stretching. This stretching is even more pronounced when cells shape our organs at the embryo stage, and when they invade tissues through narrow pores during cancer metastasis – but how cells undergo such large deformations without breaking has remained a mystery until now.

Researchers at IBEC and UPC report a new physical property of cells – which they’re calling active superelasticity – that may explain the unusual ability of cells to undergo extreme deformations. 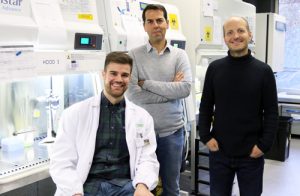 The team, led by Marino Arroyo and Xavier Trepat (centre and right), developed a new approach to subject epithelial tissues – the thin cellular layers that cover internal and external surfaces of the body – to very large deformations, up to four times their original size. These cellular layers are fundamental to life, as they protect the body from radiation, pollutants and pathogens. They are also responsible for gas exchange in the lungs, absorption of nutrients in the gut, and excretion of urine in the kidneys.

“Most materials are unhappy during stretching. As they become progressively deformed, they’ll want to go back to their unstretched state, like a rubber band, or may even break as the tension increases,” says Marino Arroyo, professor at the Polytechnic University of Catalonia and Associated Researcher at IBEC. The team found that the epithelial sheets have a different and unusual mechanical behavior. To their surprise, tissues did not break during stretching, and they were able to recover their initial size in a fully reversible way when unstretched. Even more surprisingly, some cells in the tissue barely stretched, while others became ‘superstretched’, increasing their area more than ten times.

The authors identified the molecular mechanisms that explain this physical behavior, which they call ‘active superelasticity’ as an analogy with the behavior of some high-tech metal alloys used in medical technologies. As cells become stretched, they become equally happy in an unstretched state or in a super-stretched state. As a result, these cell sheets can deal with increasing stretch by progressively switching cells into their super-stretched state without increasing tension, which would otherwise compromise integrity or cohesion. “We’re all familiar with superheroes like Ms Marvel or The Incredibles, who are able to stretch their bodies beyond human limits. It is fun to think that our cells are also super-stretchable. We are made of super-hero cells!” says Xavier Trepat, IBEC group leader and ICREA research professor.

“Understanding this surprising mechanical behavior in epithelial tissues could help us build better artificial organs or new bionic technologies such as organs-on-a-chip,” says Ernest Latorre (left) of IBEC’s Integrative Cell and Tissue Dynamics group and first author of the study.