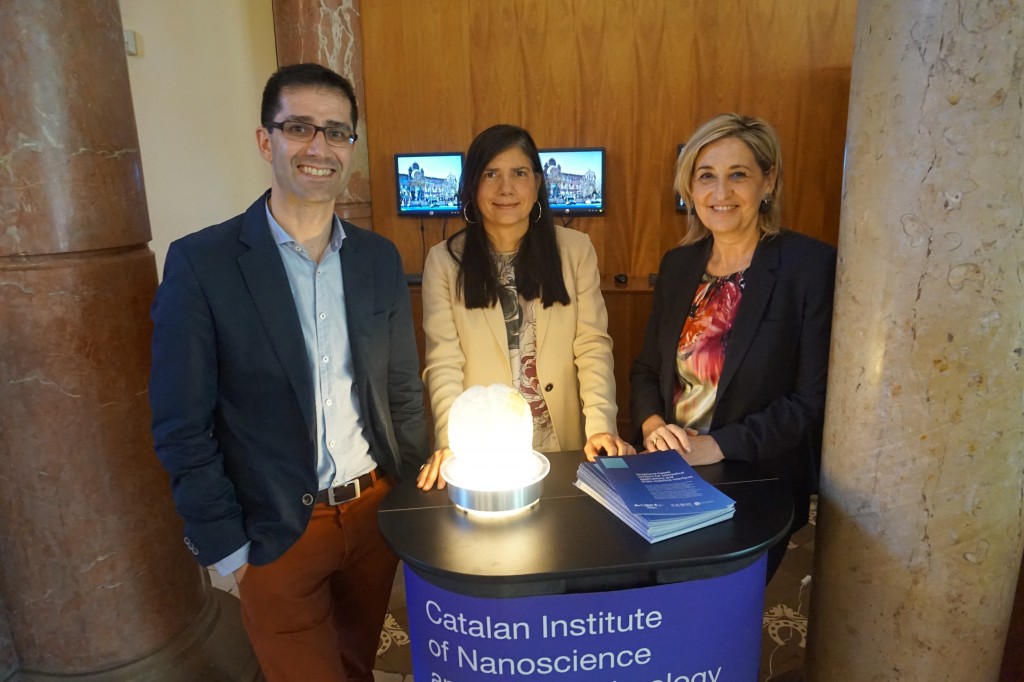 With a budget of €1 billion, the Graphene Flagship represents a new form of joint, coordinated research on an unprecedented scale, forming Europe’s biggest ever research initiative. It was launched in 2013 to bring together academic and industrial researchers to take graphene from the realm of academic laboratories into European society in the timeframe of 10 years. The initiative currently involves over 150 partners from more than 20 European countries. The Graphene Flagship, coordinated by Chalmers University of Technology (Sweden), is implemented around 15 scientific Work Packages on specific science and technology topics, such as fundamental science, materials, health and environment, energy, sensors, flexible electronics and spintronics.

Today, the Graphene Flagship announced in Barcelona the creation of a new Work Package devoted to Biomedical Technologies, one emerging application area for graphene and other 2D materials. This initiative is led by Professor Kostas Kostarelos, from the University of Manchester (United Kingdom), and ICREA Professor Jose Antonio Garrido, from the Catalan Institute of Nanoscience and Nanotechnology (ICN2, Spain), one of the six centers that make up the Barcelona Institute of Science and Technology (BIST). The Kick-off event, held in the Casa Convalescència of the Universitat Autònoma de Barcelona (UAB), is co-organised by ICN2 (ICREA Prof Jose Antonio Garrido), Centro Nacional de Microelectrónica (CNM-IMB-CSIC, CIBER-BBN; CSIC Tenured Scientist Dr Rosa Villa), and Institut d’Investigacions Biomèdiques August Pi i Sunyer (IDIBAPS; ICREA Prof Mavi Sánchez-Vives).

The new Work Package will focus on the development of implants based on graphene and 2D-materials that have therapeutic functionalities for specific clinical outcomes, in disciplines such as neurology, ophthalmology and surgery. It will include research in three main areas: Materials Engineering; Implant Technology & Engineering; and Functionality and Therapeutic Efficacy. The objective is to explore novel implants with therapeutic capacity that will be further developed in the next phases of the Graphene Flagship.

The Materials Engineering area will be devoted to the production, characterisation, chemical modification and optimisation of graphene materials that will be adopted for the design of implants and therapeutic element technologies. Its results will be applied by the Implant Technology and Engineering area on the design of implant technologies. Several teams will work in parallel on retinal, cortical, and deep brain implants, as well as devices to be applied in the periphery nerve system. Finally, The Functionality and Therapeutic Efficacy area activities will centre on development of devices that, in addition to interfacing the nerve system for recording and stimulation of electrical activity, also have therapeutic functionality.

Stimulation therapies will focus on the adoption of graphene materials in implants with stimulation capabilities in Parkinson’s, blindness and epilepsy disease models. On the other hand, biological therapies will focus on the development of graphene materials as transport devices of biological molecules (nucleic acids, protein fragments, peptides) for modulation of neurophysiological processes. Both approaches involve a transversal innovation environment that brings together the efforts of different Work Packages within the Graphene Flagship.

A leading role for Barcelona in Graphene and 2D-Materials

The kick-off meeting of the new Graphene Flagship Work Package takes place in Barcelona because of the strong involvement of local institutions and the high international profile of Catalonia in 2D-materials and biomedical research. Institutions such as the Catalan Institute of Nanoscience and Nanotechnology (ICN2) develop frontier research in a supportive environment which attracts talented researchers from abroad, such as ICREA Research Prof Jose Antonio Garrido, Group Leader of the ICN2 Advanced Electronic Materials and Devices Group and now also Deputy Leader of the Biomedical Technologies Work Package. Until summer 2015 he was leading a research group at the Technische Universität München (Germany).

Further Graphene Flagship events in Barcelona are planned; in May 2016 ICN2 will also host a meeting of the Spintronics Work Package. ICREA Prof Stephan Roche, Group Leader of the ICN2 Theoretical and Computational Nanoscience Group, is the deputy leader of this Work Package led by Prof Bart van Wees, from the University of Groningen (The Netherlands). Another Work Package, on optoelectronics, is led by Prof Frank Koppens from the Institute of Photonic Sciences (ICFO, Spain), with Prof Andrea Ferrari from the University of Cambridge (United Kingdom) as deputy. Thus a number of prominent research institutes in Barcelona are deeply involved in the coordination of this European research initiative.

The collaboration among ICN2, the Centro Nacional de Microelectrónica (CNM-IMB-CSIC, CIBER-BBN), which manages one of the largest clean room facilities in Europe, and the Institut d’Investigacions Biomèdiques August Pi i Sunyer (IDIBAPS), the biomedical research centre attached to the Hospital Clínic of Barcelona, has been important in attracting the attention of the Graphene Flagship. Both ICN2 and ICFO are founding members of the Barcelona Institute of Science and Technology (BIST), a joint initiative of six excellence research centres which aim to reinforce their international impact and increase their participation in key programs such as the Graphene Flagship.