Flavour, perception, language, and metabolism are at the heart of Brainy Tongue’s debate

By Adela FarréOctober 28, 2016CRG
No Comments 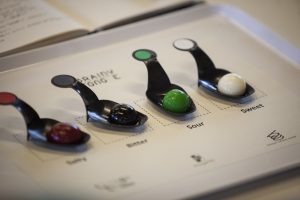 Brainy Tongue is a collaborative initiative between scientists and chefs promoted by Mugaritz, the Centre for Genomic Regulation (CRG), and the Basque Culinary Center, that looks to delve into the mysteries that govern perception and the senses.

That neural pathways from the mouth’s receptors to the brain are beginning to be mapped; that beyond the key role of flavour in survival, flavour also allows us to imagine; that the appearance of food and the words describing a menu can modulate our perception; that satiation is not at odds with the desire to eat more when a person is presented with a new and distinct flavour… These are the some of the conclusions reached during ‘The sensory Logic of Gastronomic Brain’ symposium where some twenty world-class scientists and chefs gathered between October 24 and 26 at the Basque Culinary Center (San Sebastian).

Bringing together two apparently separate worlds, participants in this forum worked together on each experiment to resolve doubts and suggest new lines of research in both disciplines. Members of the organising scientific committee agreed that “it was a challenge that forced us to step out of our routine to explore the limits of perception together from very different perspectives”. In addition, they claimed that the experience was greatly satisfying. They are also convinced that this is just the beginning for new research projects and collaborations.

Although this is a forum on science and gastronomy, language played an important role throughout the first two days of the workshop. Through diverse experiments, participants proved the importance of language in perception, as well as its limits, showing that the name of a dish may affect our desire to eat it. They also discussed the difficulty of reaching a consensus when defining a scent or flavour. In this discussion, the scientists contributed new “languages” such as physics or chemistry, which allowed the chefs to measure and precisely identify what makes a scent or flavour both unique and common to all.

From there, they moved from speaking about language in cooking, to transforming the kitchen into a language, showing that it can also be an artistic, fun, educational tool.

They have refused the classic view of the tongue’s flavour map, showing a uniform distribution of these receptors, and identifying regions specific to each flavour in the brain’s gustatory cortex. Around the flavours, a healthy debate also began on how to define electric, carbonic, fatty, or metallic tastes. Are these flavours, textures, or sensations? In looking to answer the questions posed by chefs in the symposium, new scientific research may arise.

The chefs and scientists also touched on topics relevant to health, such as metabolism, sugar consumption, and satiation. It was demonstrated that being full does not mean we stop eating. On the other hand, another surprising observation was that satiation is specific and changes our preferences. It was shown that having something in your mouth, for example something sweet, produces satiation specifically for that flavour, and helps to promote our preference for foods rich in proteins and those that are sour. This mechanism can explain why, even though we are full after a meal, we want something sweet to finish off… and we make room for dessert.

`The Sensory Logic of the Gastronomic Brain´ is the first activity driven by Brainy Tongue, an interdisciplinary collaboration project promoted by Mugaritz (Errenteria), the Centre for Genomic Regulation (Barcelona), and the Basque Culinary Center (San Sebastian), that looks to delve into the mysteries that govern perception.