The volitional brain in action: counterfactual error and the virtualization of memory 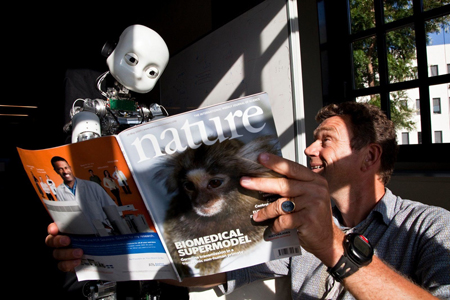 Volitional motor control can be seen as the result of a gradual replacement of feedback by feedforward control. We have addressed this question from the perspective of an integrated architecture called the Distributed Adaptive Control (DAC) theory of mind and brain. DAC proposes that the brain is a multi-layer control system which optimizes the how of action by considering why (motivation), what (objects), where (space), when (time) and who (agents) or the H5W problem. We have shown that for DAC to realize optimal solutions in foraging problems, its decision-making renders policies that simultaneously optimize perceptual evidence, memory bias, goals, and utility. This raises the question of what the principles are that underlie the processing and adaptation of these factors. In this presentation, I will focus on a link between volition, policy adaptation and perceptual learning we have recently advanced. The dominant model of anticipatory motor control relies on the notion of an inverse model that by learning from encountered errors acquires corrective responses that supersede feedback control. However, these models are predicated on a Markovian world assumption and thus by necessity face problems in handling exceptions, such as observed in probe trials, where fast feedback control is required. We solve this challenge by proposing that adaptive motor control can also be obtained by relying on a cascade of purely sensory predictions that drive feedback control via counterfactual errors or Hierarchical Sensory Predictive Control. Using robot experiments, we have demonstrated the robustness of this solution. I will present further supporting evidence for the relevance of counterfactual error in the physiology of motor learning, the neurophysiology of human memory as obtained with intracranial recordings and in the rehabilitation of stroke patients.  In conclusion Paul will comment on the challenges involved in bringing science to society.

Paul Verschure is Catalan Institute of Advanced Studies (ICREA) Research Professor, Director of the Synthetic Perceptive, Emotive and Cognitive Systems Laboratory at the Institute for Bioengineering of Catalunya and the Barcelona Institute of Science and Technology. Paul has received his MA and Ph.D. in Psychology, and has worked in Neuroscience, Cognitive Science, Robotics and Artificial Intelligence and his scientific aim is to develop a unified theory of mind and brain, to validate it using synthetic methods and to apply it to quality of life enhancing technologies. To achieve the latter goal, Paul is founder/CEO of Eodyne Systems S.L. (Eodyne.com), which is commercializing novel science grounded neurorehabilitation, education and cultural heritage technologies. Paul is founder/Chairman of the Future Memory Foundation (futurememoryfoundation.org) which aims at supporting the development of new tools and paradigms for the conservation, presentation, and education of the history of Nazi crimes. Paul is founder/Chairman of the Convergent Science Network Foundation which hosts the annual Living Machines conference for which Paul also hosts the Convergent Science Network podcast. Paul chairs the annual Barcelona Cognition, Brain and Technology summer school. Paul manages a multidisciplinary team of about 30 researchers with whom he has published over 400 articles in leading journals and conferences in a range of disciplines and has completed 15 Ironman races.