Journal Launch Online Event: First Issue of the Journal of Trial and Error

In science, there is a gap between what is researched and what is published. The Journal of Trial and Error (JOTE) aims to close that gap. 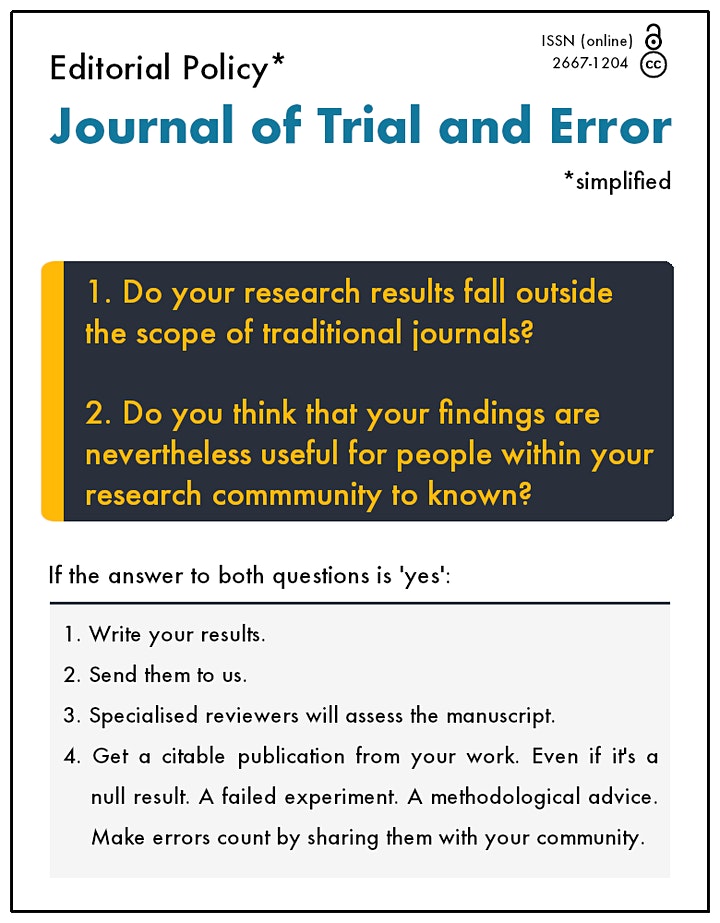 Two years ago, the Journal of Trial and Error (JOTE) was founded.

We envisioned a journal dedicated to making public the lessons of the struggles in research. In science and scholarship, trial and error is a fundamental process of learning and discovery. We thought of ‘Trial and Error’ as the inherent process of research, as the collective process of learning from the successes and failures.

But what is key to make failure productive, however, is to make them known to other researchers in the field. As researchers, we were convinced about the productive role of errors, and we become serious about creating a journal just for that.

Now, two years later, we are publishing our first issue. We are immensely proud of the various authors who have taken the leap to put their faith into this journal. To celebrate this, we are inviting authors and readers alike to an online launch event, in which we will be discussing our mission of showing scientific trial and error, as well as the contributions to this first issue.

The journal co-founders will present the journal’s mission and its future outlook, followed by presentations by contributors of the first issue and an invited keynote speaker. The floor will then be opened for discussion.

16.35 Reagent trouble: published error. Keynote address by Willem Halffman, Scholar in Science, Technology, and Modern Culture at the Institute for Science in Society, Radboud University. Recent beneficiary of the ERC Synergy Grant for ‘Nano bubbles: how, when and why does science fail to correct itself?’

17.10 Experiment and Fail by Ruud Abma, researcher in Cultural Psychology and History of the Human Sciences, Utrecht University.

17:55 Towards an Expanded Conception of Publication Bias by Nicole Nelson, Assistant Professor in the Department of Medical History and Bioethics at the University of Wisconsin–Madison.

*order changes within the schedule may occur, final version expected shortly. The starting and ending times are fixed.

JOTE publishes answers to the question “what went wrong?” in the form of short communications, as well as problematising ‘the question of failure’, facilitating reflections and discussion on what failure means in research.

JOTE stands by the call for transparency of the Open Science movement and are concerned about the replication crisis and the publication pressures that researchers face — especially junior investigators — in their pursuit of a career in academia.

The bias in the scholarly publication system works in two directions: negative results are hard to publish and draw little attention, while not all published and acclaimed results are correct. Peer review is an imperfect filter, begging the question of what to do about published errors. Through systematic literature studies on the use of reagents in biomedical research, we have tried to identify the extent of error, as well as the effect of improved journal guidelines. However, initiatives to deal with published error include the increased use of retractions, post-publication peer review, sleuthing, or campaigns to improve methodology. The wide-spread presence of error also raises more fundamental questions about the epistemological status of the published record.

Ruud Abma, ‘Experiment and Fail’ A Comment on ‘Alcohol Cues and their Effects on Sexually Aggressive Thoughts’ (https://doi.org/10.36850/r1)

Priming studies, mostly found in the subdiscipline of social psychology, have been the subject of vigorous debates among methodologists, philosophers of science, and priming researchers themselves. This article contributes to the debate about priming studies by carefully examining and dissecting one priming study in particular, namely the 2020 article “Alcohol Cues and their Effects on Sexually Aggressive Thoughts” by Julie Leboeuf, Stine Linden-Andersen, and Jonathan Carriere. By pointing out the flaws of this supposed reproduction study, I reflect on the various levels of complexity that are involved in conducting priming experiments with human subjects. I conclude that the call for more reproductions or replications is worthwhile, but only if the original experiments are solid and theoretically interesting.

Nicole Nelson, ‘Towards an Expanded Conception of Publication Bias’ (https://doi.org/10.36850/mr2)

This short essay argues for an expanded conception of publication bias. In addition to considering the selective publication of results, I argue that we need to also consider the selective publication of epistemic by-products—observations and knowledge that scientists accumulate incidentally in the process of carrying out their work. There are three reasons why we should be concerned about the exclusion of epistemic by-products from the published literature: first, because they play an important role in robust replication attempts; second, because their absence can result in misplaced scientific certainty; and third, because they contribute to a holistic understanding of natural phenomena. However, identifying and addressing publication bias against epistemic by-products and other undervalued forms of knowledge is more difficult than identifying bias against quantitative findings. I argue that scientific pluralism and making data publicly accessible are two potential remedies for addressing this form of publication bias.

Learn about the project’s mission who is behind it: https://jtrialerror.com/

The Journal of Trial and Error is a project based in Utrecht (but thoroughly international) and sponsored by the Descartes Centre for the History and Philosophy of the Sciences and the Humanities at Utrecht University.