by Gijs Wuyte of Vrije Universiteit of Amsterdam, Netherlands

Frontiers in single molecule manipulation and imaging of DNA-protein transactions

The genetic information of an organism is encoded in the base pair sequence of its DNA. Many specialized proteins are involved in organizing, preserving and processing the vast amounts of information on the DNA. In order to do this swiftly and correctly these proteins have to move quickly and accurately along and/or around the DNA constantly rearranging it. In order to elucidate these kind of processes we perform single-molecule experiments on model systems such as restriction enzymes, DNA polymerases and repair proteins. The data we use to extract forces, energies and mechanochemistry driving these dynamic transactions. The results obtained from these model systems are then generalized and thought to be applicable to many DNA-protein interactions.

In this presentation I will first show (Super-resolution) Quadruple Trap Correlative Tweezers-Fluorescence Microscopy (CTFM), a single-molecule approach capable of visualizing individual DNA-binding proteins on densely covered DNA and in presence of high protein concentrations. Moreover, proteins on DNA can be visualized on multiple DNA strand.

Next, using this instrument we have investigated human non-homologous end joining (NHEJ). NHEJ is the primary pathway for repairing DNA double-strand breaks (DSBs) in mammalian cells. Such breaks are formed, for example, during gene-segment rearrangements in the adaptive immune system or by cancer therapeutic agents. Here we show, using dual and quadruple-trap optical tweezers combined with fluorescence microscopy, how human XRCC4, XLF and XRCC4–XLF complexes interact with DNA in real time. Moreover, we find that XRCC4–XLF complexes robustly bridge two independent DNA molecules and that these bridges are able to slide along the DNA. These observations suggest that XRCC4–XLF complexes form mobile sleeve-like structures around DNA that can reconnect the broken ends very rapidly and hold them together. (Brouwer et al., Nature, doi:10.1038/nature18643 , 2016)

Third, I’ll introduce Acoustic Force Spectroscopy (AFS). With AFS we extend the force-spectroscopy toolbox with an acoustic manipulation device that allows exerting acoustic forces on tethered molecules. AFS is a Lab-on-a-chip device consisting of a flow cell of two glass plates with a fluid chamber in between and a piezo element glued on top. While applying an alternating voltage to the piezo element, forces from sub-pN to hundreds of pNs are exerted to thousands of biomolecules in parallel, with sub-millisecond response time and inherent stability. AFS distinguishes itself by its relative simplicity, low cost and compactness, which allow straightforward implementation in lab-on-a-chip devices. 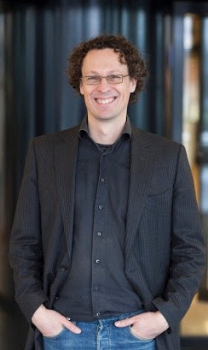 Prof. Gijs Wuite obtained his PhD in biophysics in 2000. Since 2001 he leads his own group at the Vrije Universiteit Amsterdam and in 2009 was appointed to full professor. In his research he has successfully applied quantitative physical tools to investigate fundamental problems in biology, and to search for the unification of apparently unrelated biological phenomena. Moreover, he has been at the front of recent new and fast developments of biophysical techniques that have enabled visualization, manipulation and control of complex biological reactions. In 2014 he co- founded LUMICKS, a fast growing company specialized in dynamics single molecule instruments and in 2018 he won the Dutch Physics Valorisation prize & in 2019 the Amsterdam Impact Award, for successfully launching of this company.

This colloquium is part of the BIST Master of Multidisciplinary Research in Experimental Sciences curriculum but is also open and free for anyone interested in participating.