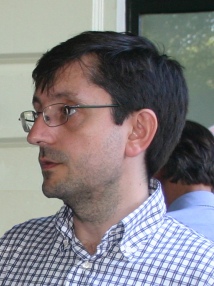 Dr. Mauricio Barahona is Professor and Chair in Biomathematics and Director of the EPSRC Centre for Mathematics of Precision Healthcare in the Department of Mathematics at Imperial College London. He will be giving a colloquium at the DCEXS-UPF on March 5th at 12:00pm, as part of the BIST Colloquium Series.

The BIST Colloquium Series consists of monthly lectures and discussion sessions with internationally recognized researchers, providing a broad exposure to multidisciplinary research in experimental sciences. The main aim of the Colloquia is to provide attendees direct contact with inspirational speakers and leaders, who will talk about cutting-edge challenges in contemporary research.

Abstract: Many cellular processes are characterized experimentally through snapshots of their evolution in time or in response to environmental changes. Typically, system-wide omics’ techniques are used to record the ‘cellular state’, leading to a description in terms of an evolving high-dimensional vector. Yet such datasets are usually analyzed through statistical techniques that do not take into account the fact that they emerge from a sampling of an underlying ‘continuum’ process wherein lies valuable biological information.
One such biological paradigm is the famous Waddington landscape of cell differentiation in developmental biology. In this talk, I will introduce a series of techniques that aim to extract directly from the data a representation of transcriptomic datasets in terms of a ‘landscape’ representing the process. Our procedure uses a combination of methods from manifold learning, geometric dimensionality reduction, stochastic processes and graph theory. The obtained model can be seen as a highly nonlinear projection coupled with an iterative selection of the relevant genes that describe the process. We illustrate the method throug examples from stem cell biology, including cell reprogramming towards induced pluripotent stem cells.

Biography: Mauricio Barahona obtained a PhD in Theoretical Physics (Dynamical Systems) from MIT under the supervision of Steve Strogatz in the Department of Mathematics. He then held a postdoctoral MEC Fellowship at Stanford University, followed by the Edison International Fellowship at Caltech. He joined the newly formed Department of Bioengineering at Imperial College London in 2001. In 2011, he moved to the Department of Mathematics at Imperial as Chair of Biomathematics. Since 2016, he is also Director of the EPSRC Centre for Mathematics of Precision Healthcare at Imperial.
His research is broadly centered around applied mathematics in biological, social and engineering systems using methods from graph theory, dynamical systems, stochastic processes, optimisation and computational algebraic geometry. Some examples include: multiscale community detection in graphs; synchronization and consensus on networks; nonlinear time series analysis; multiscale modelling of biomolecular structures; geometrical projections of high-dimensional data; analysis of metabolic and genetic networks; dynamics of neuronal assemblies; detection of roles and interest groups in social media.

Attendance is free and open to anyone who is interested.