DNA damage accumulation is a key feature of the aging process

by Prof. Fabrizio d’Adda di Fagagna of the IFOM (Italy) 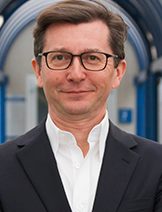 DNA damage accumulation at telomeres and their shortening below a critical length engage the DNA damage response (DDR) machinery, leading to cellular senescence and apoptosis. The contribution of telomeric DDR activation in vivo in natural aging and in aging-related pathologies remains unprobed due to the lack of approaches to selectively inhibit DDR at telomeres only.

This recently-acuired ability to specifically inhibit DDR activation at telomeres allows for the first time to control telomeric DDR and cellular senescence in physiological and pathological contexts, including ageing diseases and progerias.

Hutchinson-Gilford Progeria Syndrome (HGPS) cells show telomere dysfunction and DDR activation among other detrimental phenotypes. We demonstrated that telomeric ASO treatment in vitro of HGPS patients’ fibroblasts extends their proliferative capacity. In a conditional HGPS mouse model with the common human mutation, LMNA c.1824C>T, telomeric ASO treatment improves tissue homeostasis, reduces inflammation and significantly extends survival (Aguado et al Nature Communications 2019). In telomerase knockout (G3 Terc KO) mice, we will show how systemic treatment with telomeric ASO has an important impact on several organs, as assessed by histopathological analyses and profiling of several markers. In a zebrafish strain carrying a mutation in the telomerase gene, we will also describe the impact of telomeric DDR inhibition by ASO on the reduction of aberrant phenotypes and on extended survival.

November 2 – Prof. Dr. Oscar Franco of the Institute of Social and Preventive Medicine