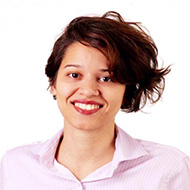 Graphene based biosensors have received widespread attention due to its unique properties such as high electrical conductivity and high surface area. The 2D structure of graphene allows all carbon atoms to be exposed to the surroundings, which makes it a good platform for adsorbing and detecting molecules with increased sensitivity. Graphene is also a biocompatible material, providing a good microenvironment for the immobilization of biocompounds, such as antibodies, enzymes, DNA, and aptamers. Therefore, these properties make graphene an appealing transducer material in biosensors. This presentation will provide an overview of the fundamentals and applications of graphene and its derivatives (graphene oxide (GO) and reduced graphene oxide (rGO)) in biosensors for healthcare monitoring.

Cecília de Carvalho Castro e Silva graduated in Chemistry from Universidade Estadual de Maringá (UEM) in 2008 and her master (2011) and PhD (2015) degree in Chemistry was at the Universidade Estadual de Campinas (Unicamp), Brazil. Since January 2016, she has been an assistant professor at MackGraphe – Graphene and Nanomaterials Research Center, São Paulo, Brazil. Currently, she is a visiting professor in the Nanobioelectronics and Biosensors Group at the Catalan Institute of Nanoscience and Nanotechnology (ICN2), Barcelona, Spain. Cecilia Silva was included by Forbes-Brazil in the list “30 Under 30”, of the 30 most talented youngsters under 30 years in 2016. The research group lead by Cecilia Silva has expertise in the synthesis and functionalization of nanomaterials and the development of miniaturized devices for biosensing applications.

May 31 – Núria Lopez-Bigas of IRB Barcelona