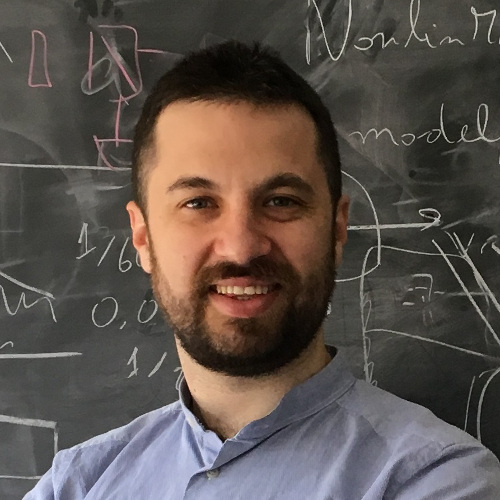 Since October 2019 I am a PROBIST Fellow at the Institute of Photonic Sciences (ICFO), with the project “Integrated Atomic Quantum Sensing”, aiming at the development of quantum and miniaturized atomic magnetometers with state-of-the-art (SOA) sensitivity for multiple applications in biomedicine, neuro-tech and space science, as previously described.

Between 2016 and 2019 I worked as Postdoctoral Research Associate and Lecturer at Princeton University (Romalis Group) in USA, where I studied fundamental effects of atomic diffusion and I used a new generation of multi-pass cells for optically-pumped-magnetometers (OPMs). This research led to the current SOA in the field of optical magnetometry with sensitivity records both in the geomagnetic range, i.e. quantum-noise-limited operation at Earth’s field [1], and in the detection of bio-magnetic fields from human brain and heart in unshielded environments [2].
In October 2016, I obtained my PhD with Laude (European Doctor Mention) at ICFO in Prof. Mitchell’s group, which I joined in February 2011, after a master in quantum interferometry at “Sapienza” University in Rome. My PhD project has been devoted to study quantum effects and enhancement of high-density atomic sensors with SOA sensitivity. During a research internship in Krakow, I demonstrated a shot-noise-limited atomic magnetometer [3], suitable for improvement by polarization squeezing. Back at ICFO, I have designed and built a versatile experimental setup that allowed us to perform the first demonstration of quantum enhancement of a high-density atomic sensor, squeezed-light spin noise spectroscopy (SNS) [4], and to validate theories on quantum limits/enhancement in SNS [5] and on Kalman filtering [6]. More recently, we used the same setup for another major breakthrough: the generation of nonlocal entanglement among 15 trillion atoms in a hot, strongly-interacting system [7], that could be useful in the next generation of atomic quantum sensors.

The global objective of my PROBIST project “Integrated Atomic Quantum Sensing” is to develop highly-sensitive and compact atomic sensors for biomedical diagnostics, like magnetoencephalography (MEG) and magnetocardiography (MCG), as well as for industrial applications like brain-machine-interfaces, space science, navigation, geo-physical prospecting and archaeology survey. Particular attention will be devoted to the implementation of magnetic gradiometers for operation in unshielded noisy environments. The project has both fundamental and technological interest, and involves atomic sensing with hot atoms in MEMS (micro-electro-mechanical systems) vapor-cells and optical micro-cavities. The first specific goal is the quantum-enhancement of optically pumped magnetometers (OPMs) by using quantum resources like optical and atomic spin squeezing under high-sensitivity and high-density optimal conditions. A second, related objective is to design cavity-enhanced OPMs with high-polarization in a pump-probe scheme where, after a train of high power pump pulses, the free precession is monitored with a probe laser resonant with the cavity. This configuration is suitable for quantum-non-demolition (QND) measurements to generate spin squeezing in highly polarized ensembles and to quantum-enhance OPMs sensitivity beyond state-of-the-art (SOA) over a broad dynamic range including Earth’s field magnitude.

We also expect to push the limits of this configuration down to sub-mm active volume OPMs, with the design and fabrication of cavity microcells. The size reduction of atomic sensors is indeed a requirement for many applications like MEG, brain-machine-interfaces, aerospace and navigation. We also plan to fabricate atomic micro-channels in transparent materials, combined with photonic waveguides, built by the group of Prof. Osellame at the Politecnico in Milan. This technology, which relies on femtosecond laser writing on glass, has 3D versatility and will allow us to develop on-chip atomic sensors like magnetometers, atomic clocks and frequency references. Finally, we want to adapt these novel cavity-induced and quantum improvements for use with a new generation of MEMS rubidium vapor-cells. This technology, developed by the Centre Suisse d’Electronique et de Microtechnique (CSEM) is central to the EU Quantum Technologies Flagship project Miniature Atomic vapor-Cells Quantum devices for SensIng and Metrology AppLications (MACQSIMAL), within which the group of Prof. Morgan Mitchell at ICFO leads the OPM work-package. Through contact with the MACQSIMAL consortium, including industry and end-users, my PROBIST results will be informed by the latest technologies and ready for uptake by the leading EU consortium on integrated atomic devices.