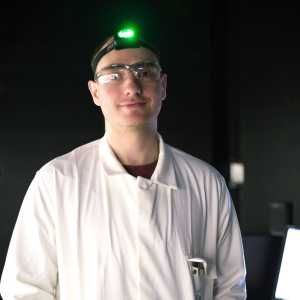 Research group: Design and construction of bio-inspired systems for the conversion of solar energy to fuel

I am interested in the development and use of ultrafast spectroscopy for the study of molecular dynamics and of charge and energy transfers occurring in a large panel of photochemical processes. As a researcher living in the 21st century, solar energy conversion has always been a key topic to me. I do believe that the understanding of the fundamental processes is primordial to design efficient solar energy conversion technologies. Therefore, I have always been interested in measuring their dynamic, which compelled me to pursue studies in physical chemistry.

At the end of my bachelor, I joined briefly Pr. Leif Hammarström’s group (Upssala, Sweden) where I developed my scientific interests. After receiving my master degree in physical chemistry from the École Normale Supérieure de Lyon and the Université Claude Bernard of Lyon (Lyon France), I did a PhD on the femtosecond fluorescence of complete dye-sensitized solar cells using organic dyes as photosensitizers under Dr. Thomas Gustavsson’s supervision (LIDYL, Paris-Saclay, France). I defended in 2018 prior to joining Dr. Elisabet Romero’s group in early 2019. I was later selected later the same year for the PROBIST program.

I take pride in being a jack-of-all-trades: trained in all kind of chemistries, building laser-based nonlinear optics setups and often applying it all to biophysics. I hope to serve as a bridge between the many activities of our research group. I am also an avid teacher. Though I am currently on a sabbatical from the French Ministry of Education, I never pass on the opportunity to share the bit of knowledge that I have.

There is no more debate on the urgency of securing renewable sources of energy. While the last decades of research has made all three generations of photovoltaics efficient enough to be commercialized, there are still room for new technologies.

Our group want to demonstrate the feasibility of using de novo protein-chromophore assemblies to form bio-inspired photosystems for solar fuel production. Within this large plan, my project focus on the design and characterization of charge separating units using state of the art time-resolved spectroscopic technics.

In my project, we proceed by implementing excitonic interactions by having a couple of chromophore in close interaction inside a protein cradle. A family of synthetic proteins (so-called maquettes) are a fitting choice for our protein cradle. Their binary pattern of amino acids leads to a water-soluble four-α-helix bundle structure able to house numerous chromophores, especially metallo-porphyrins and chlorines by ligation to a histidine residue. By varying the histidine positions in the protein chain and other amino-acids side chains, one is also able to tailor the environment of the chromophores providing the required energy landscape.
These assemblies where the vibrational and electronic energy levels can be tuned will also be used to design artificial protein displaying vibronic coherence. As such, their study could allow us to better understand the role (or absence of role) of the quantum effects in photobiology.

We specialize in using different spectroscopic methods to measure the vibrational levels energy, the nature and positon of electronic levels as well as the dynamics of the photo-excited states. Besides steady-state technics like absorption, fluorescence, fluorescence line narrowing, Stark, Raman and FT-IR spectroscopy we develop and use transient absorption spectroscopy (fs to ms) and time correlated single photon counting. The purpose of using such a variety of technics is to be able to characterize the nature as welle as the kinetics of the processes such as charge separation and charge recombination. This project is also based around the implementation of a two-dimensional electronic spectroscopy (2DES) setup at ICIQ to investigate the presence of electronic, vibronic and/or vibrational coherence in such assemblies. A substantial amount of time of the project will be spent to implement this complex method.