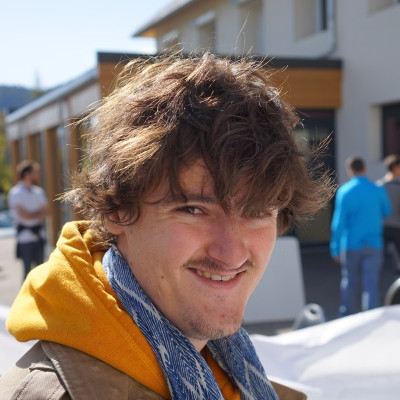 Dr. Thomas Guillet obtained two M.S. degree from the National Institute of Applied Sciences (INSA Toulouse) and Université Paul Sabatier in 2017 (Toulouse, France). He spent several short research stays at the high magnetic field laboratories in Grenoble, France and Nijmegen, The Netherlands. After his graduation, he joined the two-dimensional and semiconductor spintronics group in the Spintec laboratory (CEA Grenoble) for his Ph.D. thesis under the supervision of Dr. Matthieu Jamet. The long run motivation was to achieve the spin transistor operation and for this purpose, one has to successfully implement a platform where spin currents can be easily injected, detected and manipulated electrically at room temperature. In this sense, his thesis showed that Germanium is a very good candidate thanks to its unique spin and optical properties.

During these three years immersed in experimental physics, he developed solid skills and knowledge in thin films growth techniques like molecular beam epitaxy and magnetron sputtering as well as the structural characterization. Then, the keystone of his work was the nanofabrication of functional devices: he mastered numerous clean room techniques such as laser and e-beam lithography. Ultimately, the main tools to investigate the physical properties of the materials were magnetotransport and magneto-optical experiments, which represents the core of its expertise. Finally, he also designed and mounted most of the experimental setups that are currently used and developed extensive skills in instrumentation, cryogenic and ultra-high vacuum.

After his graduation from Ph.D. in October 2020, he joined the Physics and Engineering of Nanodevices group at the Catalan Institute of Nanoscience and Nanotechnology (ICN2) under the supervision of Prof. S. O. Valenzuela (January 2021). He is now studying the generation of spin-orbit torques in full van der Waals system based on topological insulators and two-dimensional ferromagnetic materials.

Topological insulators (TI) have gained much interest in the field of spintronics for the generation of pure spin currents. Indeed, three-dimensional TI are predicted to host exotic properties like topologically protected surface states (TSS), which show Dirac-like band dispersion and strong spin-momentum locking. The principal strategy is to use the high spin polarization of the surface charge carriers to manipulate the magnetization of an adjacent ferromagnetic thin film (FM) using the spin-orbit torque (SOT) mechanism. In the past few years, the community attempted to replace the traditional heavy metals by a TI in order to enhance the SOT efficiency without success. It now appears that the interface sharpness and the high chemical affinity between Bi-based TIs and FMs is a major issue in order to reach the predicted breakthrough in magnetization switching power-efficiency. The emergence of ferromagnetism in twodimensions in 2017, which started a new field in condensed matter physics, opens the door for this potentially groundbreaking approach. Recently, two-dimensional ferromagnets (2DFMs), were exfoliated down to the monolayer and ferromagnetic order was demonstrated up to room temperature. My project focus on stacking and growing 2DFM onto high quality TIs grown by molecular beam epitaxy. The van der Waals (vdW) nature of the interaction between the TI and the 2DFM allows to limit the possible chemical reactions, interface intermixing and hybridization of state between the two layers. The main goals of the project is to study the SOT generation and to realize the current-induced magnetization switching operation in these vdW heterostructures. Combining the unique properties of TIs and 2DFMs should result in a dramatic decrease of the power required to achieve the switching, starting a new paradigm for future magnetic memory technologies.