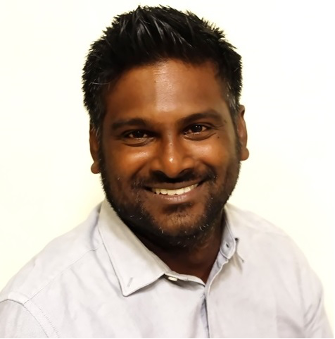 Bachelors in Biochemistry from Madurai Kamaraj Univerisity, India (2007), and Masters in Advanced Biochemistry from the University of Madras, India (2009). Awarded with Junior Research Fellowship from Council for Scientific and Industrial Research (CSIR), India through a competitive exam, he worked as a Junior Researcher at Anna University, India (2010). He received FPI-UPC and FI-AGAUR fellowships and started his Ph.D. on the thesis titled ‘Stability and ligand binding properties on human cone visual pigments’ at the Universitat Politecnica de Catalunya (2015). After completing the Ph.D., he joined as a short-term postdoctoral researcher at Institute for Research in Immunology and Cancer (IRIC), Montreal, Canada (2016-2018), investigated the interactions, and nuclear export of RNA-binding proteins of oncogenic importance. Awarded with PROBIST postdoctoral fellowship (2019), he joined Gene Translation Laboratory at IRB Barcelona and currently working on tRNA-specific deaminases and its role in translation control.

Roles and Regulation for tRNA-specific deaminases

Transfer RNAs (tRNAs) act as the translators of the Genetic Code during protein synthesis, and their structural features are crucial to the efficiency and fidelity of translation. tRNAs fold into a cloverleaf secondary structure where the nucleobases at positions 34, 35, and 36 form the anticodon that shall recognize a complementary trinucleotide codon in mRNA. Adenosines at the position 34 of tRNAs are susceptible to base modification enzymes tRNA specific deaminases (TadA in prokaryotes and ADAT in eukaryotes). Upon deamination, the adenosine is modified to inosine. Inosine at position 34 further potentiates wobble-pairing flexibility as I34-tRNAs recognize A-, C-, or U-ended synonymous codons. This contrasts with A34-tRNAs, which only efficiently recognize U-ended codons. Thus, Inosine modification at the wobble position of anticodon (I34) in transfer RNA (tRNA) is essential for translation in prokaryotes and eukaryotes.

In bacteria, the formation of I34 in tRNAs is catalyzed by a homodimeric enzyme: tRNA specific deaminase (TadA). Most bacteria have a single A34 substrate for TadA: tRNAArg with the anticodon ACG. Several bacterial species express more than one A34 tRNAs. In eukaryotes, I34 modification is catalyzed by the enzyme heterodimeric adenosine deaminase acting on tRNAs (ADATs) which evolved from prokaryotic TadAs. ADATs have a substrate diversity of seven to eight A34 tRNAs.

The current project is focused to understand this expansion of substrate specificity in deaminases and how it modulates the translation control. Further, the study will describe the substrate discriminatory mechanism of the enzyme that allows the recognition of the substrates of specific sequence and structure.