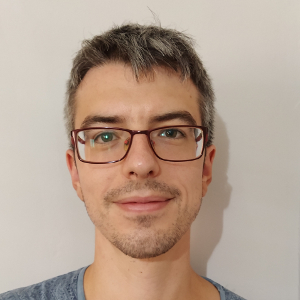 I graduated in Physics (focusing on theoretical physics) at University of Granada (Spain), spending one year abroad at Manchester University (UK). I did my MSc in particle physics at the high-energy theory group at Granada University, where I investigated the signatures of some supersymmetric models at LHC.

Interested in better understanding the Standard Model to find new-physics effects, I did my PhD in hadronic physics at Mainz University (Germany). There I focused on the electromagnetic interactions of neutral pseudoscalar mesons. These play a prominent role in computing the Standard Model contribution to the anomalous magnetic moment of the muon – an observable that plays a prominent role in constraining new-physics models.

Later, I had a PostDoc position at Charles University (Czech Republic), where I worked on radiative corrections, hadronic-light-by-light physics and rare η and η’ decays.

Currently, I have a BIST postdoc position at IFAE (Spain), where I continue working on hadronic physics, especially with emphasis on precision or new-physics searches.

Precision probes of the SM – paving the SM precision frontier

Our knowledge of the subatomic world is encapsulated in the Standard Model of particle physics, whose last piece, the Higgs boson, was finally found at LHC in 2012. Still, the new particles and forces, that were expected to be found based on theoretical grounds, remain elusive so far. In particular, direct searches for these particles at LHC, the most powerful collider ever built, suggest that such particles might be heavy enough not to be produced at this machine.

Still, there is an alternative to direct searches in which these new particles are not created, but inferred from precise measurements. There, the tiny effects of such hypothetical particles produce a deviation with respect to the Standard Model prediction. These kind of searches necessitate however not only a precise experiment, but also a precise theoretical prediction within the Standard Model, that is often challenging – especially when hadronic particles (strongly interacting particles, such as protons or neutrons) are involved.

It is the aim of my research project to improve on this side, contributing to the big and wide effort of deciphering the ultimate laws of nature.

In this respect, I have mainly three research lines:

1) I am currently investigating the description and connection of D+ → K–π+l+ν and D+ → K–π+π+ decays, reducing its description to simpler and better known hadronic quantities.

2) I am investigating the hadronic-light-by-light contribution to the anomalous magnetic moment of the muon. The latest quantity has helped in setting strong constraints to new physics models, and there is an ongoing experiment that will improve the current experimental precision. This would be however unfruitful if the theoretical prediction would not be improved to a similar precision. This requires to improve the hadronic contribution, among which the hadronic-light-by-light one is one of the big challenges.

3) I am investigating rare η and η’ meson decays, that could be a good place to search for new-physics effects. One of the opportunities is to look at CP-violating observables: if such effects are found, it is certain that new physics are behind them. The labour here is twofold: first, improving the hadronic effects that are required to describe such decays; second, given the absence of CP-violation in other sectors, to estimate the precision that is required to be competitive with respect to the former.