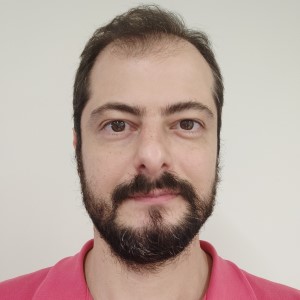 Bachelor (2009) and Master (2011) in Physics, both at Universidade Federal do Rio Grande do Sul (UFRGS – Federal University of Rio Grande do Sul) in Porto Alegre-RS (Brazil). Ph.D. in Microelectronics (2015) at Programa de Pós-Graduação em Microeletrônica (PGMICRO – Graduate Program in Microelectronics) – UFRGS, with a one-year collaborative period in Paul-Drude-Institut (Berlin-Germany). During graduate studies, worked in the research of alternative semiconductor and dielectric materials for future nanoelectronics, such as germanium and graphene. After the conclusion of Ph.D., he worked as a postdoctoral researcher at Laboratório Nacional de Luz Síncrotron (LNLS – Brazilian Synchrotron Light Laboratory) from June of 2015 to October 2018, investigating the mechanocaloric effects in polymers. Currently, is a postdoctoral researcher working in a collaborative project at The Institute of Photonic Sciences (ICFO) and the Catalan Institute of Nanotechnology and Nanoscience (ICN2).

Visible and Near-lR Plasmonic Photodetectors Based on Graphene Nanoribbon Structures

Graphene plasmons exhibit extreme confinement down to the atomic limit (1) and near-field enhancement, opening compelling possibilities for light manipulation. More singularly, the optical response of these plasmonic excitations can be controlled by electrostatic gating (both in energy and intensity), leading to order-unit changes in absorption (2, 3) that can be modulated with THz bandwidth (4). However, the frequency range of these plasmons is located at mid-IR frequencies, far from de 1.5 μm telecommunications near-infrared (IR) regime, limiting their application in practical optoelectronic devices. An effective way of pushing plasmons to higher frequencies is to reduce the structure’s lateral size (D). According to our predictions, to achieve the telecommunication regime D sizes below 5 nm are required (4), which are beyond the state-of-art top-down lithography resolution.

Recent studies have shown that 1-3 nm-wide graphene nanoribbons (GNR) with extremely low defect density can be synthesized out of hydrocarbons precursors (5, 6). However, the lack of interibbon connectivity impedes the application of homogeneous electric fields using microscopic contacts, an essential ingredient for the induction of a uniform plasmonic response at the macroscale. In 2018, the group of Prof. Mugarza at ICN2 reported a novel method to synthesize ultra-long (>100 nm) and sub-5 nm GNRs that can be covalently coupled to give rise to a 2D porous graphene (7). The combined characteristics of these nanoporous graphene (NPG) structures (size, parallel alignment, and electrical connectivity) are ideal for optoelectronic applications and offer the unprecedented possibility to measure plasmons in graphene-based material within the telecommunication wavelengths range.

Based on this premise, the general aim of the present project is to explore the feasibility of fabricating gate-modulated optoelectronic devices based on the plasmonic response of the NPG structures. As specific goals expected, we list i) fabrication of field-effect transistors (FET) with optimized doping and charge injection characteristics; ii) optical and iii) electrical detection of gate-modulated plasmonic resonances in the visible and near-infrared spectral range. The proof of concept of such FET devices with the electrically modulated plasmonic signal will open a pathway to graphene optoelectronics at the telecommunications regime.