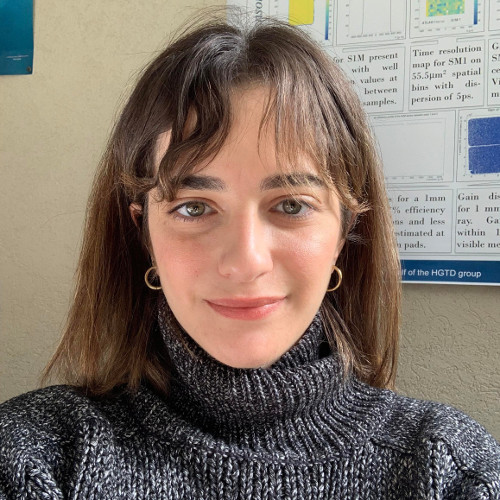 My research interests lie at the intersection of data analysis and particle physics, particularly on the study of the Higgs sector. I earned my bachelor’s degree at Hacettepe University in Ankara/Turkey at the Physics Engineering department with honorary mention, where I continued my master studies with an emphasis on experimental particle physics that allowed me to collaborate with Istanbul Technical University to work on CMS detector at CERN, Initially I was involved in the upgrade studies, and later in the analysis of collision data collected by CMS in order to quantify the radiation damage on the detector components. After finalizing my master studies, I joined the research group of the Université Clermont Auvergne as a PhD student at Laboratoire de Physique de Clermont (LPC). My PhD research covered a broad range of topics within the ATLAS experiment at the LHC. There I was involved in two important physics analyses; the search for Higgs boson production in association with the top quark pair (ttH), and the search for Higgs boson pair production (HH). The former allows a direct measurement of the top-Higgs Yukawa coupling, whereas the latter is required to probe the Higgs potential, both high-priority topics in the exploration of the Higgs sector. Both searches focused on multi-lepton final states. I recently started as a postdoctoral researcher at IFAE, and continue to work in ATLAS. Building on my broad expertise on searches in multi-lepton final states, I am playing a leading role in an ambitious program of uncovered searches for new phenomena, such as flavor-violating heavy Higgs bosons that are preferentially coupled to the top quark. I am responsible for the software preparation, data preprocessing and augmentation based on cloud and batch computing infrastructure of CERN. On this context, I designed deep neural-networks (NN) for multi-class classification tasks in order to classify different signal models, as well as to discriminate the signals from backgrounds and I optimised their setup based on standard practices for hyper-parameters search. I enhanced these classification algorithms by regulating the NN in order to obtain a ”decorrelated classifier” to ensure the stability of the network predictions over changes of individual features. I am working as well on the statistical interpretation of the analysis.

The Standard Model (SM) is very successful in explaining almost all experimental data to date, and it’s complete with the discovery of the long-awaited Higgs boson at the CERN Large Hadron Collider (LHC). However, despite its tremendous success as a theory for the fundamental interactions, it lacks explanations for ”dark mat- ter” and ”dark energy”, the matter-antimatter asymmetry, and cannot describe gravitational phenomena in the quantum regime. In addition, the fact that the observed Higgs boson mass is so small, while being subject to large quantum corrections (known as the ”hierarchy problem”), and the puzzling structure of masses and mixings of elementary fermions (known as the ”flavour puzzle”) are still big mysteries. In the SM, the fermion masses are proportional to their couplings with the Higgs boson, and these couplings are flavour diagonal. This special structure of nature could be governed by some yet hidden dynamics. A simple and natural extension of the SM is the inclusion of two Higgs doublets (2HDM). In 2HDM scenarios with a CP-conserving Higgs potential, the Higgs bosons after Electroweak Symmetry Breaking are two neutral CP-even (h and H), one neutral CP-odd (A) and two charged (H±) Higgs bosons. The well-known 2HDM Type-I/II however invoke a Z2 symmetry to implement the Natural flavour Conservation (NFC) condition, i.e. just one Yukawa coupling matrix per lepton charge, and forbids all flavour changing neutral Higgs (FCNH) couplings. Many studies show that dropping this ad-hoc symmetry is possible, which will allow for flavour-violating processes, remaining consistent with all experimental data. A general 2HDM (g2HDM) including off-diagonal Yukawa couplings for the second doublet in the alignment limit, can be probed at LHC and these scenarios can address several shortcomings of the SM: electroweak baryogenesis, strong CP problem, flavour problem, etc. On the other side, there are many open questions related to lepton properties and interactions. UV-complete models, which extend the SM into asymptotically safe are among the simplest extensions of the SM and Vector- like-leptons (VLL) appear in such extensions that can address several shortcomings of the SM, such as the ”hierarchy problem” and the ”flavour puzzle”.